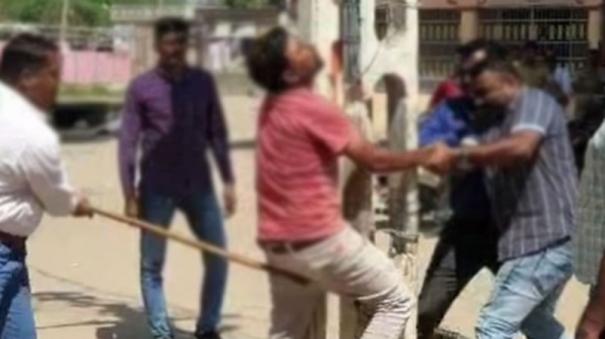 The All India Trinamool Congress Party has lodged a complaint with the National Human Rights Commission against the police who tied up and batoned Muslims in public in Gujarat. The information related to this complaint was given by the spokesperson of the party Saket Gokhale through Twitter.

This incident took place recently in Undela village in Kheda district of Gujarat state. The police tied some Muslim youths to an electric pole and beat them with lathis for allegedly pelting stones in an event held in the area. It is noteworthy that the video was spread on social media.

“The National Human Rights Commission should have voluntarily investigated the brutal police attack on Muslims in the state of Gujarat. Shame on the commission for not doing so. At the same time, the Commission cannot give any reason as no one has filed a complaint regarding this issue. Because a complaint has been filed on behalf of Trinamool,” he said in his tweet.

He also shared proof of complaint. The police have explained that this is the customary punishment for those who throw stones. The police department has stood as a judge in this divorce and given punishment. For the sole reason that they are Muslims, the complaint said. This has happened at a time when the assembly elections in the state of Gujarat are approaching. Therefore, it is reported that there may be a political motivation for this.

It is a matter of shame to see that National Human Rights Commission (NHRC) has not suo moto taken up the matter of Gujarat Police publicly flogging Muslim youth.

But they shouldn’t have the excuse of “no one complained”

We @AITCofficial have filed a complaint with the NHRC today pic.twitter.com/yucrjMmF0N