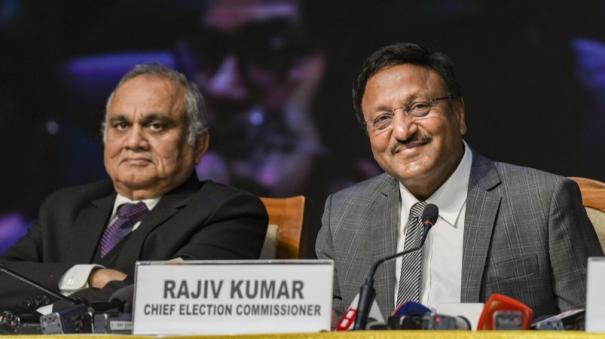 New Delhi: The Election Commission has announced that the assembly elections will be held in one phase in Tripura on February 16 and in Meghalaya and Nagaland on February 27. The election results will be announced on March 2.

The term of the legislatures of 3 northeastern states Tripura, Nagaland and Meghalaya ends in March. In this case, the Election Commission announced the assembly elections in these 3 states yesterday.

Assembly election polling will be held in single phase on February 16 in Tripura and February 27 in Meghalaya and Nagaland. The election results will be announced on March 2, the Election Commission said.

In Tripura, where elections are to be held on February 16, nomination filing will begin on the 21st and end on the 30th. The petitions will be considered on the 31st. February 2nd is the last day to withdraw the petition.

Similarly, in Meghalaya and Nagaland, where elections are to be held on February 27, nomination filing will begin on February 31 and end on February 7. The petitions will be considered on February 8. February 10 has been announced as the last day for the candidates to withdraw their petition.

30 blocks each: Tripura, Meghalaya and Nagaland have 30 assembly constituencies each. Chief Election Commissioner Rajeev Kumar said that the participation of women voters is always high in these 3 states.

CODE OF CONDUCT ENFORCEMENT: Following the announcement of the elections, the code of conduct has come into effect immediately in the above 3 states and Erode East Assembly Constituency.

In 2023, assembly elections are going to be held in a total of 9 states. Firstly, elections have been announced for 3 northeastern states. Of these, BJP is in power in Tripura, NDP in Nagaland and NPP in Meghalaya. The BJP is paying extra attention here as it won Tripura for the first time in the last election in 2018.

Erode East Constituency By-election on Feb 27: Thirumagan Evera (46) was the Congress MLA from Erode East. Thirumakan Eevera, grandson of Periyar’s brother Krishnasamy and son of former Tamil Nadu Congress president EVKS Ilangovan, died of a heart attack on the 4th. Following this, the assembly secretary announced in the recent assembly session that the Erode East constituency is vacant.

A by-election should be held in the constituency within 6 months of the vacancy being declared. In this case, along with the 3 state elections, the Election Commission has also announced the Erode East Assembly Constituency by-election. Filing of nominations for the by-election will start from January 31 to February 7. The petitions will be reviewed on February 8. Last date for withdrawal of petitions is 10th Feb. It has been announced that polling will be held on February 27 and counting of votes on March 2.