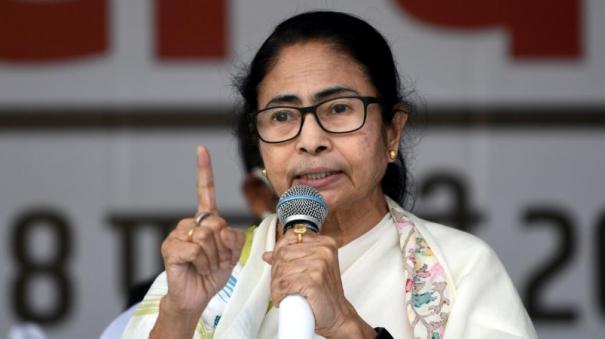 Kolkata: Mamata Banerjee said, “Tughlaq is ruling among the BJP with the help of some government agencies. The Tughlaq regime will not be able to stop the Trinamool Congress.”

Speaking at a public meeting in Jhargram, West Bengal, Chief Minister Mamata Banerjee slammed the ruling BJP. Speaking at the meeting, Mamata Banerjee said, “The Tughlaq regime is being run by the BJP government with the help of state intelligence agencies. If they (BJP) believe that the Tughlaq regime can stop the Trinamool Congress, it is wrong. We are very strong.”

They are not ashamed even after the BJP’s defeat in West Bengal. Worried about the 2024 parliamentary election defeat. That is why the BJP has been lying that violence is taking place here. Unfortunate things are likely to happen in some places in such a large state. We do not even want that to happen. Action is being taken against the culprits. But in the BJP-ruled states, justice is not available to the people there.

Various allegations have been made regarding the selection of employees. In that case, if something goes wrong, the perpetrators will be prosecuted. During the rule of the previous Left, the job of writing the name on a piece of paper has been given. I will release those abuses soon. “

He was speaking following allegations of malpractice in appointments made by the State Personnel Selection Commission.

Earlier, the CBI had alleged that Rs 1,352 crore had been embezzled in the illegal allocation of coal mines in West Bengal, including Abhishek Banerjee, the son-in-law of Chief Minister Mamata Banerjee, and his wife Rujira. The enforcement department filed a lawsuit against both last year. The Enforcement Department has already summoned the two to appear at the Delhi office for investigation into the scam.

Abhishek Banerjee’s petition in the Delhi High Court against this was dismissed and he filed a petition in the Supreme Court. He also demanded that he be questioned by enforcement officials in Kolkata.

The bench, headed by Justice UL Lalith, recently allowed the Enforcement Department to hold a hearing on Abhishek Banerjee in Kolkata. “The West Bengal government should co-operate with the Enforcement Department’s investigation. Authorities must provide security when it comes to interrogation. In Kolkata, the enforcement department should inform Abhishek Banerjee 24 hours before the trial, ”the judges said.