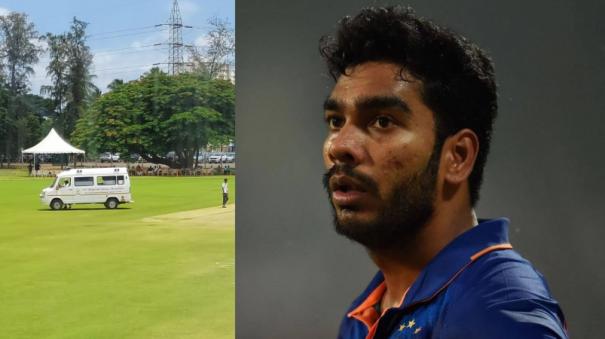 Coimbatore: Indian cricket team’s all-rounder Venkatesh Iyer has been injured after a West Zone bowler threw the ball wildly at him.

The first-class cricket tournament in Indian domestic cricket, the Duleep Cup, is held annually. As such, the series for the current season is currently underway. As the series has reached the semi-final round, the West and Central Zone teams are playing in the semi-final match.

In this match being held at the SNR Cricket College ground in Coimbatore, the West Zone team scored 257 runs in the innings and were all out. The Central Zone team, which continued to play, was bowled out for 128 runs. West Zone scored 130 runs for the loss of 3 wickets in the second innings.

Venkatesh Iyer, who played for the Indian cricket team, is playing for the Central Zone team. Venkatesh Iyer hit the boundary line for a six from West Zone bowler Gaja and then approached the next ball with a tackle. As the ball went straight to bowler Gaja, he caught it in frustration and threw it towards Iyer.

It hit Iyer’s shoulder and neck area, causing him to collapse in agony. An ambulance immediately arrived at the scene. Physio specialist also examined. Subsequently, Iyer stood up in a few minutes and left due to injury. Later, Venkatesh Iyer returned to bat after enduring the pain and was dismissed for just 14 runs.