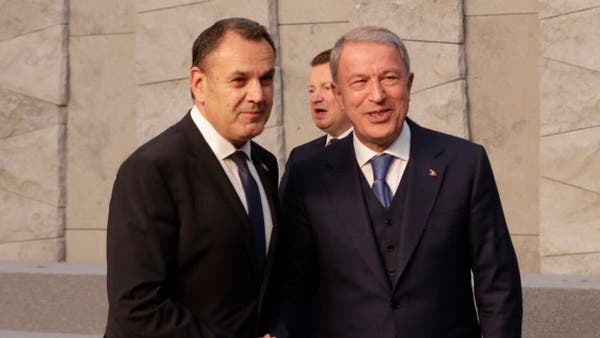 The Turkish Defense Ministry announced that the Turkish and Greek defense ministers met today, Thursday, on the sidelines of the North Atlantic Treaty Organization (NATO) meeting, amid renewed tensions between the two neighbors.

Discussions between Turkish Defense Minister Hulusi Akar and his Greek counterpart Nikos Panayotopoulos, in the Belgian capital, Brussels, focused on “the importance of continuing dialogue in order to reduce tensions,” according to a statement issued by the ministry.

The two ministers discussed the need to maintain open channels of communication, to focus on a positive agenda and bilateral and regional cooperation, according to the statement.

The meeting came amid a new escalation in tensions between the two NATO members, which have a history of disputes over a range of issues such as mineral exploration in the eastern Mediterranean and claims in the Aegean.

Turkish President Recep Tayyip Erdogan had warned Greece last week, during Turkish maneuvers near the Greek islands, which included an amphibious landing scenario, that the Aegean islands should be demilitarized, saying he was not joking.

Ankara said Athens’ reinforcement of its military presence on the islands violated treaties under which it ceded the islands to Greece in the 20th century after a long period of Turkish and Italian occupation.

Greece responded that the islands needed defenses due to threats from Turkey, which has the second largest army in NATO and has a large landing fleet on the Aegean coast.

Greek state television reported that Panayotopoulos spoke with Akar after they posed next to each other to take a picture of NATO leaders. “We will not be able to move forward if you continue with this discourse and these policies,” Panayotopoulos was quoted as telling Akar.

Greek government spokesman Giannis Okonomou said Thursday that “Greece has no intention of engaging in any way that would increase tension in the region.”

This week, Greek Prime Minister Kyriakos Mitsotakis sought to reassure his citizens, saying that despite the sharp tone of Turkish rhetoric, relations had not reached their lowest levels as they were in 2020, when the warships of both countries were chasing each other in the eastern Mediterranean.