Turkey.. Dozens arrested during a protest against the collapse in the price of the lira 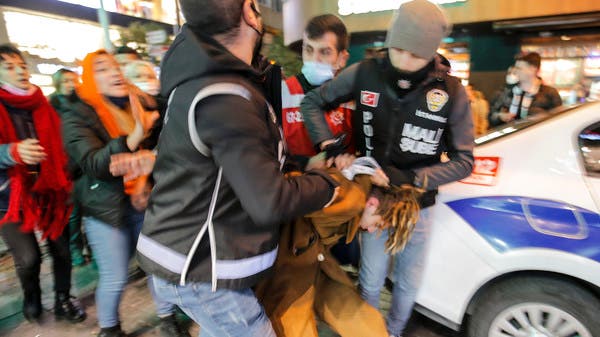 Turkish riot police on Wednesday broke up a protest in Istanbul by demonstrators denouncing the government’s economic policies and the rising cost of living.

The police detained dozens of demonstrators.

The protesters, mostly members of left-wing groups, began gathering in the quiet residential district of Kadıköy on the Asian side of Istanbul, when police intervened.

Police used shields to disperse the crowds, and pulled some protesters away, much to the ridicule of bystanders.

Associated Press journalists who were at the protest site said police detained more than 30 protesters.

The protest comes amid rising inflation that has severely eroded the purchasing power of Turkish citizens, high unemployment, and a sharp depreciation of the Turkish currency – the lira – which has followed a series of interest rate cuts.

In addition, the newspaper “Birgun” reported that similar protests took place in Ankara and other Turkish cities.

On Tuesday, the Turkish Communist Party organized two protest rallies in the capital, Ankara and Istanbul, after the dollar and euro exchange rates rose, as participants in the rallies demanded the resignation of the Justice and Development Party.

Also in Istanbul, the Communist Party organized a protest rally in Kadikoy district in the Asian side of Istanbul.

The Istanbul branch of the Communist Party called for measures due to the rising cost of living and recent economic developments.

Although the number of participants in the gatherings in Ankara and Istanbul was limited, it is one of the rare times in the era of justice and development in which citizens revolt against the economic conditions.