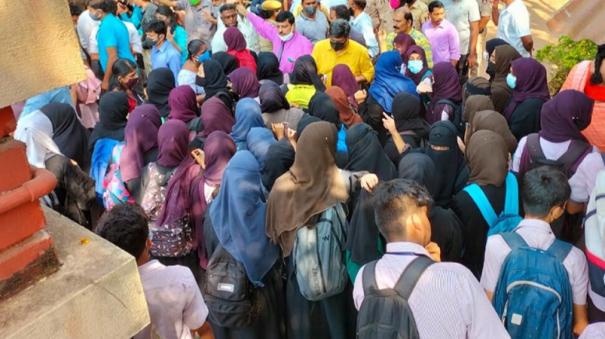 BangaloreKarnataka: The state government has banned the wearing of the hijab in schools and colleges following protests. The case filed by 6 Muslim students against this is pending in the Supreme Court.

In this context, the Government of Karnataka has made it compulsory for PU college students to wear uniforms in order to strengthen the hijab ban. Following this, Muslim students in districts including Udupi, South Kannada, Mangalore and Shimoga have been protesting for permission to wear the hijab. Twenty-four Muslim students at Uppinangadi Government First Dara PU College in Dakshina Kannada district have been boycotting class for the past one week demanding permission to wear the hijab.

The college administration has categorically stated that the hijab cannot be allowed as it is prohibited to wear the hijab and the uniform is compulsory.

However 24 Muslim students were involved in the series of struggles. Against this the ABVP student body announced that they would hold a protest wearing saffron shawls.

Meanwhile, the college administration has ordered the suspension of 24 Muslim students who fought against the hijab ban.