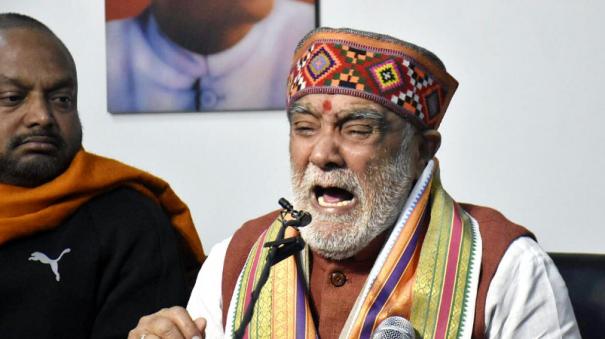 Patna: Union Home Minister Ashwin Chaubey said on Monday that he had been attacked twice in the last 24 hours.

Union Minister of State Ashwin Chaubey, who met the media in this regard, said, “When I was on a fast in Buxar to protest the oppression of farmers, some people came running to attack me from a distance of 5-6 feet with sticks in their hands. By then, my bodyguards and the police caught three of them and saved me. I wonder what would have happened if they had not been stopped.” I do not know

Not only that, a man with a country gun in his hand ran among the police who were there for security. The police were amused and did not try to catch him.

The police and the people there took the thugs who attacked me to the police station and gave them protection. Police DSP who came there, our party workers, told my assistant, no problem, tell the minister to look after his work. Let those arrested do their work, he said. It is unfortunate to hear such a thing from Bihar’s DSP.

I want to ask Bihar Chief Minister Nitish Kumar. There have been two attempts to attack me in Bihar in the last 24 hours. Why are the attackers who were taken to the police station yet to be arrested? On whose pressure they were released”, said the minister.

Earlier, on Sunday night, a convoy carrying the chief minister overturned and met with an accident. In this, many policemen were injured. He posted a video on his Twitter page. In it, a vehicle belonging to Koransarai police station, on its way from Buxar to Patna, met with an accident on Matila – Narayanpur road in Tumra. By the grace of Lord Sriram everyone is well. The injured guards and the driver have been taken to hospital. I am going with them to Tumran Hospital. After first aid treatment there, they will be taken to Patna AIIMS and I will accompany them,” he said.