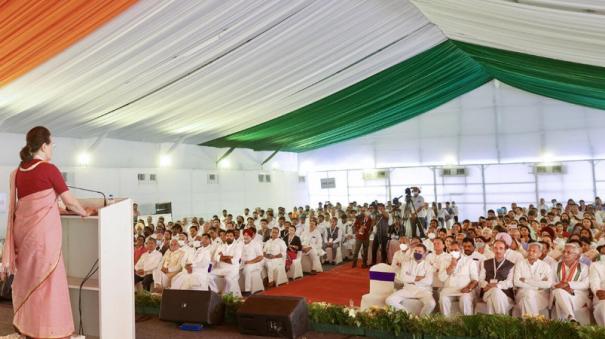 The Congress Party Conference was held on May 13, 14 and 15 in Udaipur, Rajasthan. The conference was convened amid questions over whether the Congress should continue under the leadership of the Nehru family or whether a new leader should emerge outside it.

The beleaguered Congress Party is now planning to act with a sudden urge to reshape itself. It seems that the Udaipur Conference has decided to travel in that direction. It seems that Sonia Gandhi has entered the fray quickly after her defeat in 5 state assembly elections, including Uttar Pradesh.

If the Congress party’s Udaipur conference said anything to the people of the country, it was’ We have fallen. But let’s get up. ‘

Congress President Sonia Gandhi delivered the inaugural address of the conference with great enthusiasm. His tone seems to be to confront the BJP government directly. The delegates gathered there received a message. It would have been clear to them that Sonia Gandhi was very clear and aggressive and that we could not be rolling the pot as usual. He did not say ‘do or die’.

The Udaipur Conference can be divided into three parts. One, criticism of the actions of the BJP government. Two, the economic resolutions of the Congress Party. Three, the major changes to be made in the establishment of the party. Criticisms of the BJP government are not new. But, its severity is new. Sonia Gandhi has described attacks on minorities as brutal. He also accused the BJP government of completely dividing the country. A small section of the Congress is of the opinion that soft Hindutva should be followed. Sonia’s speech left them speechless. In a recent resolution, only sectarian groups were excluded from making a connection with religious, caste and social forces.

One can also expect drastic changes in the party establishment. The congressional hearing about that were exactly where the congressional hearing about that were coming from. These are good efforts. ‘Go to the people. The Congress has called on them to “join them and take to the streets to fight for the sufferings of the people.” The Udaipur conference has caused a significant change in the Congress party. But the steps to be taken following this must be sincere and constructive. Otherwise, people will not rally behind the Congress party.