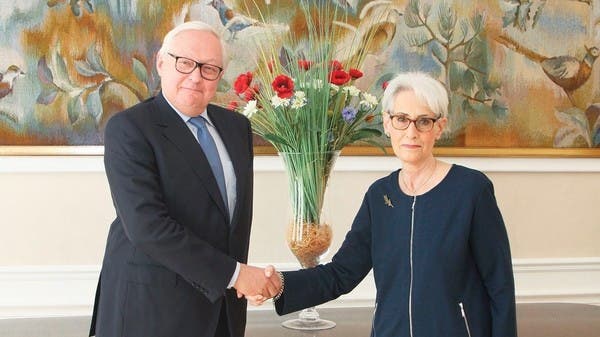 US Assistant Secretary of State Wendy Sherman announced that she discussed, on Monday, with her Russian counterpart, Deputy Foreign Minister Sergei Ryabkov, reciprocal steps to reduce escalation related to missiles and military exercises, but she renewed Moscow’s warning of the severe consequences that it will suffer if it attacks Ukraine.

“We discussed a number of ideas that would enable our countries to take reciprocal measures that would be in our security interest and improve strategic stability,” Sherman told reporters after talks in Geneva with Russian Deputy Foreign Minister Sergei Ryabkov.

On the other hand, Russian Deputy Foreign Minister Sergei Ryabkov said in a press statement after the meetings: “We told the Americans that we do not seek to invade Ukraine.”

After hours of talks with his US counterpart, Russian Deputy Foreign Minister Ryabkov urged Washington not to “underestimate” the threat of confrontation, but also stressed that the situation was “not hopeless.”

On Monday evening, a new round of Russian-American negotiations concluded in Geneva within the framework of the strategic dialogue between the two countries, focusing on the issue of security guarantees.

“We made clear to the Americans our concerns about the expansion of the North Atlantic Treaty Organization (NATO),” the Russian Deputy Foreign Minister said in a press statement after the meetings, noting that “the talks with Washington on Ukraine were complicated.”

The Russian-American meeting lasted about 7.5 hours and took place behind closed doors at the headquarters of the United States mission in the Swiss city of Geneva, and the two sides interrupted it several times, including for a short lunch.

The Russian delegation was headed by Deputy Foreign Minister Ryabkov and Deputy Defense Minister Alexander Fomin, while US Deputy Secretary of State Sherman led the US delegation.

In conjunction with the updates, NATO Secretary-General Jens Stoltenberg warned Russia on Monday of “a high cost” it would incur if it launched a new attack on Ukraine, stressing NATO’s support for Ukraine’s “right to defend itself.”

“We want to send a clear message to Russia that we are united, and that it will incur high economic and political costs if it again uses military force against Ukraine,” Stoltenberg said during a meeting with Ukrainian Deputy Prime Minister, Olga Stevanishina. We support Ukraine and help it strengthen its right to self-defense. Quoted from AFP.

For her part, Stefanishina stressed that “nothing about Ukraine should be done without Ukraine.”

“The aggressor is not in a position to impose conditions, as long as the Russian tanks have not left the Ukrainian border,” she added.

The Russian delegation arrived shortly after 0830 GMT in a motorcade amid heavy security.

The headquarters of the US mission in Geneva is located meters from the Russian mission, close to the United Nations headquarters.

It is the third time that Sherman and Ryabkov have met in Geneva since a meeting between Russian President Vladimir Putin and his American counterpart Joe Biden in June on the bank of Lake Lyman.

Ryabkov and Sherman first met on July 28 at the US permanent mission before meeting September 30 at the Russia mission.

This third meeting kicks off a week of intense diplomatic activity in an attempt especially to defuse an explosive crisis centered on Ukraine.