Ukraine: President Zelensky has been subjected to 5 assassination attempts since the start of the war 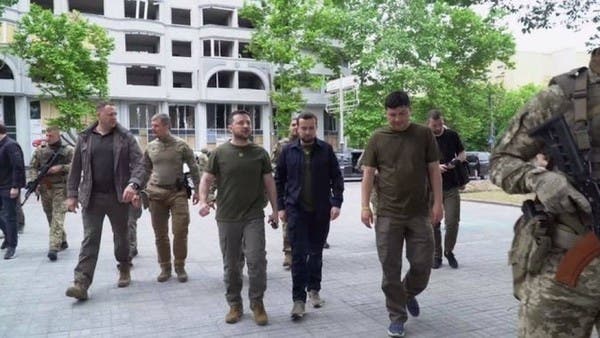 Ukraine’s Security Council announced on Saturday that President Volodymyr Zelensky has been subjected to five assassination attempts since the start of the war.

Zelensky said earlier that Kyiv has a “Plan B” in the event of the death of any of the country’s leaders, including the head of state.

According to Zelensky’s “RPK” newspaper, the country’s authorities are ready to take measures in the event of such a development of events. “According to our legislation, someone rules the country. We were prepared and separated.. the Prime Minister and the Speaker of Parliament.”

His first visit to the city of Mykolaiv

Zelensky, who has rarely traveled outside the capital since the start of the Russian invasion, made his first visit to the southern Ukrainian city of Mykolaiv on Saturday.

#Zelensky June 18th
In Mykolaiv region.
Meeting on important issues of the region. They discussed the state of the economy, the restoration of water supply, the situation in agriculture. Special attention was paid to threats from land and sea. pic.twitter.com/3w4Ybhnb12

A video clip released by the Ukrainian presidency showed Zelensky inspecting a severely damaged apartment building and holding meetings with local officials in the coastal and industrial city of Mykolaiv, still under Ukrainian control but close to Russian-occupied Kherson.

The city is still a target for Moscow because it is located on the road to Odessa, Ukraine’s largest port.

The visit comes a day after a Russian raid that killed two people and wounded 20 others in the city.
In the video, local governor Vitaly Kim Zelensky reviews the damage to an apartment building. The pictures showed a wide gap in the large building through which the apartments could be viewed from the inside.

Zelensky held a meeting with local officials in an apparently underground hall, handing them awards for their bravery.
The presidency explained that they “discussed the state of the economy, the restoration of water supplies and the situation of agriculture.”
“Special attention has been paid to land and sea threats. We will not stop working for victory,” the statement said.

On the ground, the Russian army continues to strike the positions of Ukrainian forces and military infrastructure, today, Saturday, as part of its military operation aimed at liberating Donbass in eastern Ukraine, while Kyiv continues to mobilize Western support and receive military equipment.