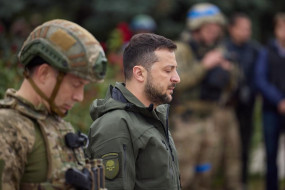 Digital Desk, Kyiv. Ukrainian President Vladimir Zelensky has rejected Russia’s offer of a short Christmas truce. Ukraine says it is a ruse by Moscow to halt Ukrainian advances in the eastern Donbass region and bring in more troops and equipment.

On Thursday evening, Russian President Vladimir Putin ordered his defense minister to impose a 36-hour ceasefire on Ukraine’s front line, starting at 12 noon on Friday, the Russian Orthodox Christmas, the BBC reported. The Russian Orthodox Church celebrates Christmas Day on 7 January according to the Julian calendar.

In a statement, the Kremlin said, “Considering the appeal of (Kirill, Patriarch of the Russian Orthodox Church), the President hereby instructs the Minister of Defense of the Russian Federation to implement a ceasefire for 36 hours.” The order asked Ukraine to do the same, so that people could celebrate Christmas Eve on Friday and Christmas Day on Saturday.

But in his nightly address to the nation, Zelensky said, they now want to use Christmas as a cover to halt the advance of our troops in the Donbass for a short period of time and force equipment, ammunition and troops into our territory. want to get closer

In a tweet, he said that the Russian Federation should leave the occupied territories, only then it would start a temporary ceasefire. Keep your hypocrisy to yourself. In another statement, the adviser called Putin’s offer just a propaganda gesture. Nothing more than that.

He said Russia wanted to demonstrate a humanitarian approach to the war and try to persuade Europeans to put pressure on Ukraine. We should not respond to the Russian leadership’s deliberate manipulative initiatives, Podolyak said. In a tweet, Secretary of the National Security and Defense Council of Ukraine Oleksiy Danilov said, “We will not negotiate any ceasefire with them (Russia). It has nothing to do with us.