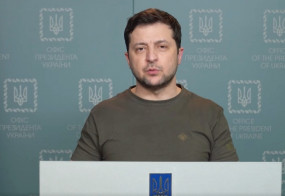 Digital Desk, Kyiv. Ukraine is to implement 107 rules and directives under the Association Agreement with the country’s deputy prime minister, the European Union (EU), for European and Euro-Atlantic integration.

Ukraine’s Deputy Prime Minister Stefanishna told an official press briefing on Thursday that the legislative acts necessary for Ukraine’s integration with the European Union have been submitted to parliament for consideration.

He said that Ukraine will be able to further strengthen its relationship with the European Union due to the rules and directives. It will also open the way for the start of negotiations on possible accession to the block.

The association agreement between Ukraine and the European Union entered into force on September 1, 2017, Xinhua news agency reported. The agreement enables Kyiv and Brussels to cooperate in areas such as trade, defence, taxation, border control and the fight against terrorism. On 23 June, EU leaders gave their support to Ukraine as a candidate for membership in the bloc.