Umma Party: Hamdok will form a competent government of technocrats 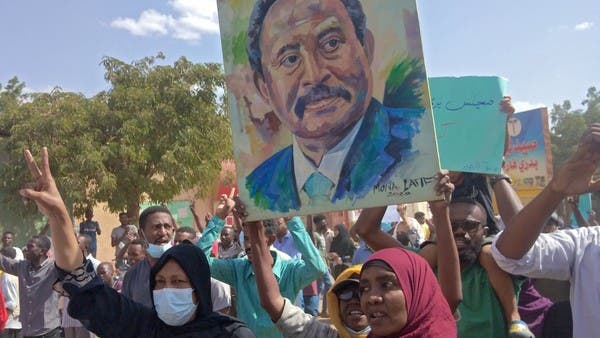 With Al-Arabiya/Al-Hadath confirming earlier, today, Sunday, that an imminent agreement will be announced in the coming hours between the civilian and military components in Sudan, the head of the Sudanese Umma Party, designated Fadlallah Burma Nasser, stated that the army will restore Abdullah Hamdouk to the position of Prime Minister, after reach an agreement. He told Reuters that Hamdok will form a competent government of technocrats.

He also added that all political detainees will be released.

Nasser also stated that he participated in a meeting late yesterday evening, Saturday, during which mediators reached a political agreement.

A source familiar with the talks said that the Sovereignty Council will hold an urgent meeting, today, Sunday, before announcing the agreement.

Al-Arabiya sources had confirmed that a political agreement would be announced later today, after a night-time meeting between Army Commander Abdel Fattah Al-Burhan and Hamdok, during which the two parties reached an agreement to release all detainees and detainees since last October 25.

Hamdok also agreed to form a new government of competencies, without excluding the signatories of the Juba Peace Agreement.

Also, it was reported that a committee to review the provisions of the constitutional document will meet today to resolve some points of contention regarding Hamdok’s return.

In addition, the sources indicated that an urgent meeting of the new Sovereign Council will be held this afternoon to agree on the Prime Minister.

It is noteworthy that the army chief had announced on October 25 (2021), the dissolution of the government and the Transitional Council, and the imposition of a state of emergency in the country, until the formation of a new government, which he pledged at the time to consist of civilians and qualified personnel.

The armed forces also launched a campaign of arrests that included a number of politicians and government officials, as well as leaders in coordination and civil parties.

These steps led to international criticism, and regional and international efforts to return the country to the “democratic path” and the transitional period that has been governed since 2019 with the participation of the civilian and military components, while Hamdok has adhered, since the first day of his placement under house arrest, to the release of all political detainees.