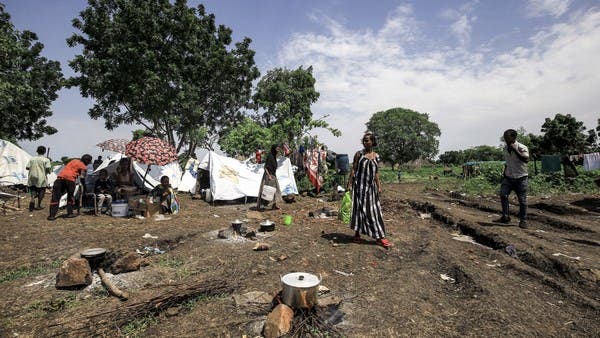 UN aid agencies suspended their work in Tigray after air strikes in which dozens of people were killed and wounded in an air strike on a camp for displaced people, northern Ethiopia, aid workers said.

Pictures spread on social media, believed to be of wounded people receiving treatment, following an air strike on a school in Didibet town, Tigray province.

It was not possible to confirm the occurrence of the raid independently.

Government forces have been fighting rebels in Tigray for more than a year, in a war that has claimed thousands of lives.

Field clashes between government forces and the rebel alliance led by Tigray leaders have temporarily halted, but air strikes on rebel positions continue.

On Saturday, Reuters news agency quoted rescue workers as saying that local authorities had confirmed the number of casualties.

Relief workers, whose names were not disclosed, provided pictures of the wounded in hospitals, including children.

It is not known how or why the school was hit by the air strike.

On Friday, the government announced the release of prominent opposition figures, including leaders of the rebel Tigray People’s Liberation Front.

The Tigray conflict erupted in November 2020 when Abiy Ahmed ordered a military campaign against regional forces in the area. He said he did so in response to an attack on a military base of government forces there.

The tension reached its height after months of tug of war between Abi Ahmed’s government and the leaders of the Tigray People’s Liberation Front.

The conflict has forced thousands to flee their homes, and the United Nations has warned that the area is in need of urgent humanitarian assistance, including medical supplies.