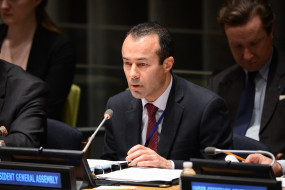 UN Assistant Secretary-General for the Middle East, Asia and the Pacific Khalid Khyari warned that, as we have seen many times in the past, the situation at Jerusalem’s holy sites is very delicate, and any incident or tension there could lead to violence across the region. may cause.

The Kingdom of Jordan reiterated the Secretary-General’s call for parties to refrain from actions that could escalate tensions in and around holy sites, Xinhua news agency reported. The Al-Aqsa Mosque complex, known as the Temple Mount, is sacred to both Muslims and Jews.

A 1967 agreement between Israel and Jordan allows non-Muslim worshipers to enter the Al-Aqsa Mosque compound, but praying there is prohibited. Tuesday’s visit to Ben-Gvir was the first by an Israeli minister since 2017.

He said that over the past several days, the United Nations has been in close contact with relevant parties to de-escalate the situation. At this sensitive moment, all efforts to de-escalate should be encouraged, while provocations, provocative moves, unilateral actions and threats of violence should be categorically rejected, Khyari said.

Nandyala: He died saving the passengers.. This RTC driver, the real hero, was awarded in January!