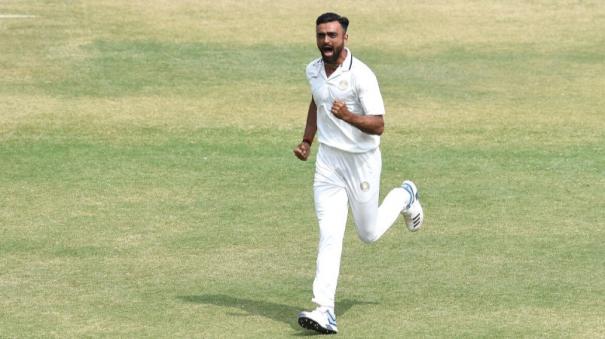 Rajkot: Saurashtra fast bowler Jayadev Unadgad took a hat-trick in the first over in the Ranji Trophy cricket match against Delhi.

The Delhi team batted first in this match which started yesterday at Rajkot. Saurashtra fast bowler Jayadev Unadgad bowled the first over of the match and dismissed Dhruv Shorey (0), Vaibhav Rawal (0) and Yash Dul (0) in the 3rd, 4th and 5th balls respectively. With this, Jayadev Unathgat created the historic record of becoming the first player to take a hat-trick of wickets in the first over of the game in the 88-year history of Ranji Cup cricket.

Earlier, Karnataka’s Vinay Kumar had achieved this feat in two overs against Mumbai in the 2017-18 Ranji Trophy season. He took wickets in the last ball of the first over and then in the first two balls of the 3rd over to take a hat-trick.

Unadkat’s superb delivery saw Delhi take the first 3 wickets before starting the run count. Ayush Padoni (0) was dismissed in the next over bowled by Chiragjani. Jayadev Unathgad then dismissed Jandi Sidhu (4), Lalit Yadav (0) and Laksai Thareja (1) in his successive overs. As a result, the Delhi team lost 7 wickets for 10 runs.

After this, the Delhi team crossed 50 runs as the pair of Branshu Vijayaran and Hrithik Shokeen played calmly. Prerak Mankat separated the pair who added 43 runs. Pranshu Vijayaran was dismissed for 15 off Prerak Mankat. Despite falling wickets at one end, Hrithik Shokeen played aggressively and scored a half-century. Unathgat dismissed Shivank Vasisht, who played in support of him, for 38 runs. Delhi lost all wickets for 133 runs in 35 overs when Kuldeep Yadav (0) walked in the very next ball.

Hrithik Shogun remained unbeaten on 68 runs off 90 balls with 3 sixes and 9 fours. On the Saurashtra side, Jayadev Unathgat conceded 39 runs and took 8 wickets. Continuing to bat, Saurashtra scored 184 runs for the loss of one wicket in 46 overs at the end of the first day’s play. Opener Harvik Desai was unbeaten on 104 off 124 balls with 15 boundaries and Chirag Johnny was unbeaten on 44.

Salman Rushdie still has trouble writing due to attack

The Algerian fans mocked Mahyous with provocative clips. The response was stranger than the player! (video)