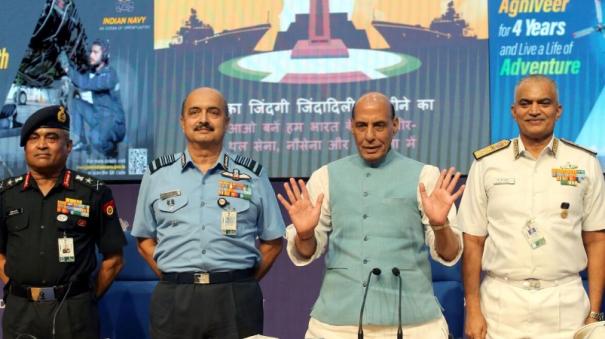 New Delhi: The Union Cabinet has approved a new project called ‘Agni Path’ which will enable the Army, Navy and Air Force to serve for 4 years. Under the scheme, young men and women between the ages of 17.5 and 21 can join the three forces.

Recruitment in the Indian Army is done under 2 categories namely Permanent Service and Short Service. To serve in the permanent service one has to join the National Defense Academy in Pune, Maharashtra, the Indian Army Academy in Dehradun, the capital of Uttarakhand, and the Officers Training Academy in Gaya, Bihar. Those who are trained in these can serve as permanent service officers in the army. Those who enlist in the Army’s short-term service can serve from 10 years to 14 years.

In this context, a new scheme called ‘Agni Path’ is being introduced for recruitment in the Army, Navy and Air Force. The plan was approved at a cabinet meeting chaired by Prime Minister Narendra Modi in Delhi yesterday.

Joining the security forces is the dream of every Indian youth. To make their dream come true, the ‘Agni Path’ project is being launched in the three forces. This is the beginning of a new transformation.

The entire Indian security forces are full of vibrant youth. This will further strengthen the Indian Army. Young people joining the three forces under the new scheme will get adequate pay and benefits. Thus he said.

Army Commander Manoj Pandey said, “The Agni Path project will be conducted on the basis of merit. The best soldiers will be added to the permanent service of the army. The average age of security forces personnel is now 32. The new plan will reduce the average age of players to 26 in the next 5 years. ”

A statement from the Federal Reserve stated that:

Both men between the ages of 17.5 and 21 can join the trio in the ‘Agni Path’ program. Current educational qualifications and fitness practices will be followed.

Those who join the new program will be called Agni Warriors. They have to serve 4 years on contract basis. 46,000 Agni warriors will be selected in the current year.

After four years of service, the players’ contribution will be Rs 5.02 lakh, the same amount as the government and Rs 11.71 lakh plus interest. This amount is income tax deductible. Life insurance of Rs. 48 lakhs will be provided during the working period.

There is no pension

Agni soldiers will not be given pension as they are working on contract basis. However a loan facility will be arranged for them to start a business. Certificate of competency and academic credentials to enroll in higher education will be provided in order to move on to the next job.

Soldiers joining the three forces under the ‘Agni Path’ scheme can apply for permanent service after completing 4 years of service. Permanent assignment will be given based on their ability. They can serve up to 15 years. About 25 percent of firefighters in that category will be recruited on a permanent basis. Thus stated in the report.

During the Kargil War of 1999, less than 3 years of service, military officers and soldiers performed well and sought victory. With this in mind, the ‘Agni Path’ project has been introduced. Recruitment in the new scheme will start in the next 90 days. The first team of Agni players will be ready in July next year.

One-fourth of the Indian military budget is spent on pensions. Since there is no pension in the Agni Path project this amount can be saved and the three forces can be modernized. Defense sources said.