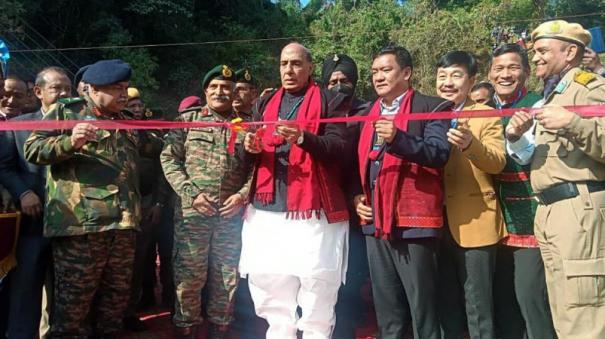 In June 2017, Chinese troops attempted to trespass in the Doklam border area of ​​Sikkim. Indian soldiers stopped them. On June 15, 2020, a massive clash took place between Indian and Chinese soldiers in the Kalwan Valley of Ladakh. On December 9, more than 600 Chinese soldiers tried to trespass in the Yangtze border region of Dawang district of Arunachal Pradesh. Indian soldiers stopped them and drove them away. Infrastructure including roads and bridges are being continuously improved to counter the threats from China in the border areas of Sikkim, Ladakh and Arunachal Pradesh.

The inauguration ceremony was held at the newly constructed Cheom Bridge on Along-Yin Keong Road, Arunachal Pradesh. Speaking on the occasion, Minister Rajnath Singh said: Infrastructure including roads and bridges are being improved for the convenience of security forces stationed at the border.

India does not want war. Rama, we desire peace according to the teachings of Buddha. Prime Minister Narendra Modi’s statement that this is not the time for war has been widely accepted internationally.

However, if war is imposed on India, we will face it with determination. Steps are being taken to protect the country from all kinds of threats. The security forces are ready for anything to face any challenge at the border.

Now 22 bridges have been opened in states including Sikkim, Arunachal Pradesh, Kashmir, Ladakh, Uttarakhand, Punjab and Rajasthan. The Central Government is striving to create a strong, self-reliant new India to meet the challenges of the future. Thus he spoke.

The Siom Bridge across the Siom River on Along-Yin Keong Road in Arunachal Pradesh will be a boon for soldiers. Officials have said that through this 100-meter-long bridge, soldiers can rush to the border area.