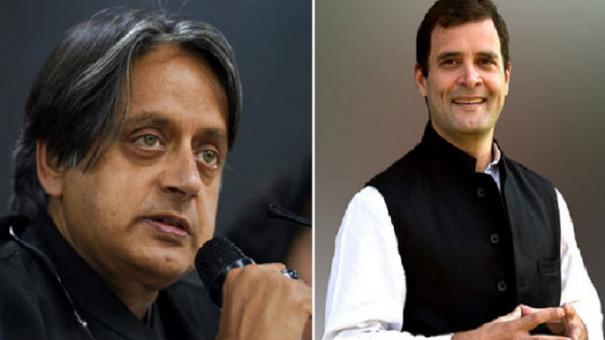 The Congress MP said that the state parties have no policy. While Rahul Gandhi’s speech has caused an uproar, Sasi Tharoor has commented on it.

In the run-up to the 2024 parliamentary elections, Rahul Gandhi’s criticism of state parties as unprincipled has angered its allies in the states. The Jharkhand Mukti Morcha, which is in alliance with the Congress in the state of Jharkhand, and the Rashtriya Janata Dal, which is in alliance with Bihar, have questioned these criticisms. HD Kumaraswamy, leader of the secular Janata Dal party in Karnataka, did not spare Rahul either.

சசிதரூர் உதவிக்கரம் … In the context of criticism of Rahul Gandhi’s comments, the Congress MP. Sachitharur has explained about it. In an interview with private television, he said, “Rahul Gandhi’s point of view has been misunderstood. The Congress is a national party, so it will have a nationwide vision. We will always give a voice to the nation as a whole. In that sense, the policies of the state parties, the Trinamool Congress, the Rashtriya Janata Dal, the Samajwadi Party and the DMK, are in line with the policies of the Congress. “

Criticism of the parties ..Manoj Jha of the Rashtriya Janata Dal (RJD) has criticized Rahul Gandhi for saying, “Rahul Gandhi’s speech is bizarre.

The Jharkhand Mukti Morcha party has also questioned Rahul’s views. “Let’s not forget that Congress relies on state parties to survive in the states,” it said.

HD Kumaraswamy, leader of the secular Janata Dal party in Karnataka, said, “The Congress party has a disease of hating state parties. It should not be forgotten that the state parties have been instrumental in keeping the Congress in power for 10 years.”