UP: Attack on Muslim youth – Controversy over video shared by BJP MLA as ‘gift to rioters’ 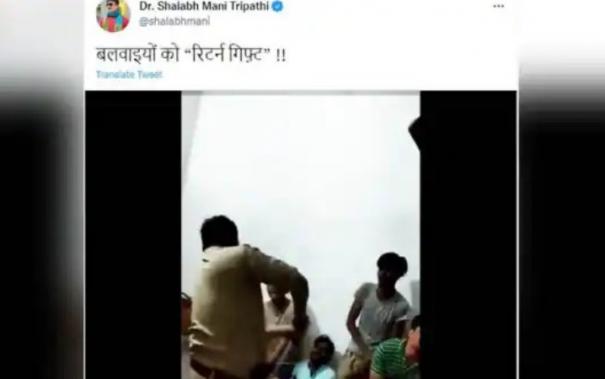 New Delhi: Video of Muslim youths being attacked by police in Uttar Pradesh has gone viral on social media. It has become a controversy that a BJP MLA shared this on Twitter as a ‘reward to be given to the rioters’.

Nupur Sharma, a former BJP spokesperson, had criticized the Prophet Muhammad, the Muslim ambassador. A Muslim protest against this erupted in Saharanpur, UP last Friday.

More than a hundred Muslim youths have been arrested in the case. The Saharanpur police who took them into custody recorded the scene of the blind attack with a stick on their mobile phones.

Shalap Mani Tripathi, a BJP MLA from UP’s Theoria constituency, uploaded the post on his Twitter page. He has been working as a journalist in popular Hindi newspapers since 1998 and was the head of one of the Hindi media till 2016.

He joined the BJP in 2016 and was appointed as the party’s state spokesperson. He posted a record of Muslim youths being attacked under the headline ‘Reward for rioters’, which went viral.

And many in the BJP are sharing the record, referring to it as a revenge foil. It is illegal to carry out an attack in the name of police custody investigation. In this context, it has been alleged that the Saharanpur police had deliberately attacked Muslim youths for videotaping without caring about any law and order.

Many Muslim families in Saharanpur have been tearfully complaining to local journalists that the victim belongs to their family.

Zaiba, the sister of Mohammed Saif, who was attacked, said: “My brother has been beaten so badly by the police that he can’t even stand up. They post this visually and mercilessly go viral on social media. He was not even taken to hospital for treatment of his injuries. ”

The Supreme Court has ruled that such an attack on police custody is a criminal offense. It has ordered state governments to install surveillance cameras in all police stations across the country and take action to prevent this. Uttar Pradesh had the highest number of deaths in police custody last year, according to the Central Criminal Records Bureau.

Commenting on the video, Saharanpur District SSP Akash Tomar said, “It does not appear that the video was taken in Saharanpur. We have not received any complaint so far. ”

Meanwhile, the residence of Javed, the main culprit in the Allahabad riots in Uttar Pradesh, is being planned in Saharanpur as well. Saharanpur district authorities are investigating the whereabouts of 93 of the culprits.