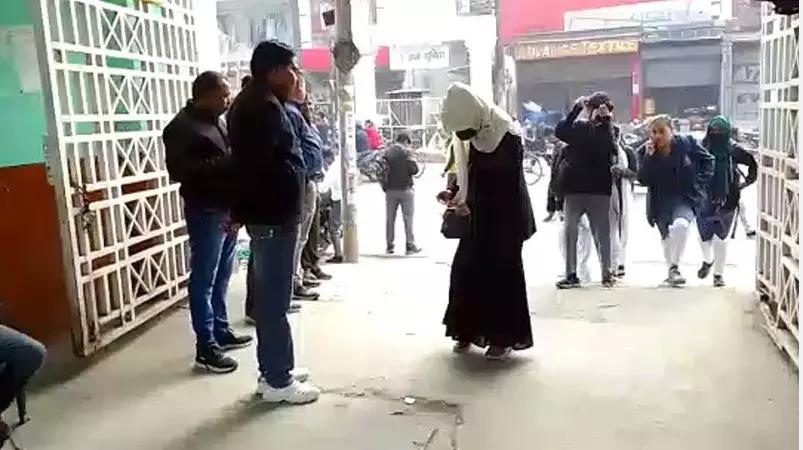 New Delhi: MJP in Bareilly, UP. There is Rohilkhand University. One of its member colleges is Hindu College, Moradabad. In this college located in Moradabad where there is a majority of Muslims, it has been customary for many female students to wear burqa to their classes every day.

In this case, a new uniform was introduced for all the students in this college from January 1. In this situation, the day before yesterday, some Muslim students came to the college wearing burqa. They were stopped at the entrance by the college guards.

Due to this, a crowd of students gathered there. A section of them started arguing with the guards to allow burdha-clad students inside.

The informed administration sent some professors there on its behalf. Meanwhile, students of the Samajwadi Party wing of the college student council also came there and voiced their support for the Burda students. A heated argument took place between them and the professor’s side. Videos of this were shared on social media and went viral.

On behalf of the administration at the college gate, Professor AP Singh said, “Since January 1, new dress code has been implemented for everyone. According to this, no one is allowed to wear burdha inside the college anymore. “According to the new rules, no one will be allowed in the college campus without wearing the uniform,” he announced.

One of the professors of the college, N.U.Khan, was recently attacked by unidentified persons while entering the college and escaped. The CCTV footage at the gate revealed that the attackers were not college students but outsiders. After this, new dress code was enforced for students to prevent further attacks on professors.

However, a section of the students complained that the college administration had followed the principles of the ruling BJP in UP.

In this matter, Moradabad district police officers were called to help. On the part of the students, a petition was submitted asking for permission for Muslim girls to wear burqa. The college management said it would consider this. Subsequently, the police ended the protest by pacifying the students.