UP Explosion at an illegally operating firecracker factory; 11 killed, more than 20 injured 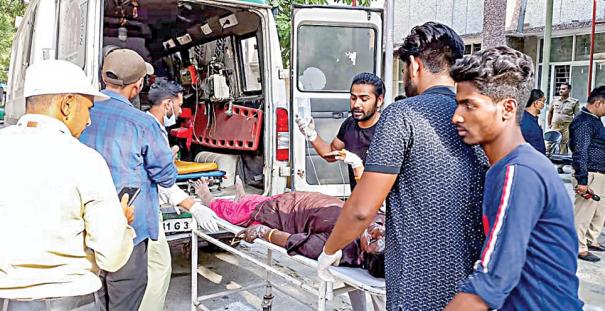 Lucknow: An illegal firecracker factory in Uttar Pradesh caught fire yesterday. Of these, 11 died. More than 20 were seriously injured.

Hapur district in the state of Uttar Pradesh is located at a distance of 60 km from Delhi. There are numerous factories operating in the Taulana area of ​​Hapur district. A fire broke out at a factory there yesterday with a terrifying noise. This caused the fire to spread throughout the plant, igniting and burning.

Eleven people were burnt to death in the accident. More than 20 were seriously injured. They have been admitted to hospitals in Delhi and Meerut. It is feared that the death toll could rise as the condition of some of the injured is worrying.

Hapur District Collector Megha Rupam and high officials went directly to the plant where the accident took place and expedited the rescue operations. Soldiers rushed in fire trucks and fought for hours to put out the blaze.

A license has been obtained to manufacture electronic goods at the Taulana plant where the fire broke out. However, crackers are made illegally at this plant. Also, plastic toy guns are made.

The explosion was caused by ammunition stored at the plant. Firecrackers exploded continuously and the fire spread to the surrounding areas. We are investigating the accident. Strict action will be taken against those who run the plant illegally. Thus he said.

Hapur District Collector Mega Roopam said, “The plant is licensed to manufacture electronic goods. However, a preliminary investigation has revealed that the crackers were made illegally there. A special committee will be set up to look into the matter. Forensic examination will also be conducted. Based on the report of the special committee, the perpetrators will be severely punished, ”he said.

Plastic guns made at the factory melted and fell on the injured workers. The workers suffered severe burns. Some workers suffocated to death from the cane caused by the explosion. ”

Prime Minister Narendra Modi tweeted, “The accident at the Hapur plant in Uttar Pradesh is heartbreaking. I extend my deepest condolences to the families of the victims. The state government is rushing to provide the necessary medical assistance to the injured. ”