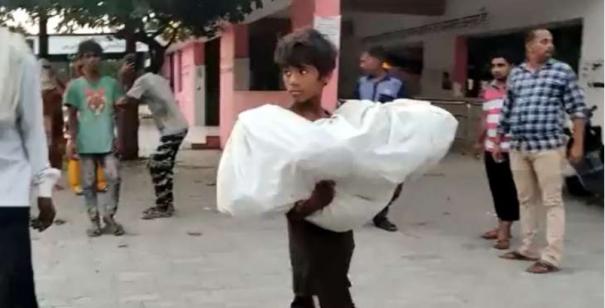 New Delhi: A 10-year-old boy carried the dead body of his 2-year-old brother in his arms as he was denied an ambulance at Baghpat Government Hospital in Uttar Pradesh.

Baghpat is a district near Muzaffarnagar in UP. Praveen Kumar lives with his second wife in a village of this district. He is a laborer and has 2 sons. Praveen’s second wife is responsible for bringing up their 2-year-old child, Kala Kumar. But he did not take proper care of the child. Due to this, the child is crying all the time. Last Friday night, the angry 2nd wife threw the child Kala Kumar between the wheels of the overturned vehicle on the highway in front of her house. The child died tragically. For this, Praveen’s second wife has been arrested. An autopsy of baby Kala Kumar was done at Baghpat Government Hospital.

After this, when an ambulance was called to take away the child’s body, it was not available. Then his younger brother’s body was found by his 10-year-old brother Sagar Kumar
He is wrapped in a white cloth and carried in his arms. Along with Praveen and his cousin have walked. Not everyone has sandals on their feet. Some people there videotaped it and uploaded it on social media. In this, tragically, the footage of the boy Sagar Kumar carrying the body of his 2-year-old brother in his arms went viral.

Praveen Kumar says, ‘My house is about 40 km from here. I also carried my child’s body for many kilometers. My elder son brought the dead body because of the pain in my hands. After getting this information through the video, Baghpat District Chief Medical Officer sent an ambulance vehicle,’ he said.

An inquiry committee has been set up in this regard on the orders of Bagpat District Chief Medical Officer. In recent times, there have been reports of many states denying ambulance to many people even after such death. Among these, it is considered pathetic to know that the blood relatives of the deceased continue to carry their bodies on bicycles, rickshaws and on their shoulders.