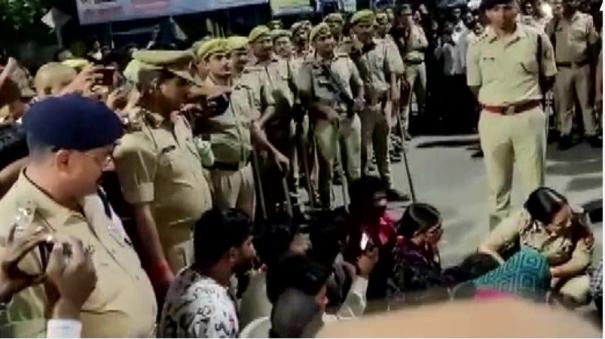 Lakhimpur: In Lakhimpur of Uttar Pradesh state, two minor sisters belonging to the caste caste were sexually assaulted and murdered. Police have arrested 6 people in connection with this incident.

Two girls, aged 17 and 15, were found dead hanging from a tree on Wednesday evening in Nikasan police station limits of Lakhimpur district. This incident has created a sensation in Uttar Pradesh. In connection with this horrific incident, the police have arrested six persons namely Suhail, Junaid, Hafisul, Rahman, Karimuddin, Arif and Chotu.

The girl’s mother alleged that while the two girls were cutting fodder for cows, three men from a neighboring village came on a motorcycle and abducted her daughters. In connection with the incident, the girls’ mother and the villagers staged a picket at Nidasan Junction, a few km from the village.

The opposition parties have severely criticized the Uttar Pradesh government regarding this incident. Congress General Secretary Priyanka Gandhi Vadra posted this on her Twitter page. In it, “The killing of two sisters in Lakhimpur is heart-wrenching. Their relatives have said that the girls were kidnapped in broad daylight. Newspapers giving false advertisements on TV cannot improve law and order. Above all, why are crimes against women increasing in Uttar Pradesh?”

Akhilesh Yadav, leader of the opposition in the state and head of the Samajwadi Party, called it “a repeat of the Hadhras atrocity”. In his Twitter post about this, two Dalit girls have been kidnapped and murdered in the area under Nikasan Police Station. The girls’ father has alleged that their bodies were subjected to post-mortem examination without panchanama and family consent. “The recent killing of Dalits after farmers in Lakhimpur is a repeat of the ‘Hathras ki Peti’ atrocity,” he said.

After abducting 2 Dalit sisters in Nighasan police station area and killing them and then the father’s allegation on the police is so serious that their postmortem was done without Panchnama and consent.

After the farmers in Lakhimpur, now the killing of Dalits is a heinous repetition of the ‘Hathras ki beti’ massacre. pic.twitter.com/gFmea4bAUc

The Aam Aadmi Party MP has expressed his shock over this incident. Sanjay Singh said, “This incident has exposed Chief Minister Yogi Adityanath’s petti bachao (save the daughters).”