US Open | Pad on the nose… Nadal, who played with an injury, advances to the 3rd round 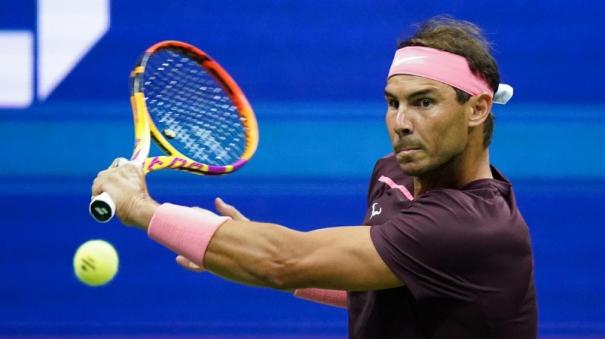 New York: Veteran Rafael Nadal has been injured after accidentally touching his nose with his racket (pad) during the ongoing US Open tennis tournament. Because of that, his nose is oozing. He spoke about it after the match.

36-year-old Nadal hails from Spain. He has won 22 Grand Slam titles in men’s singles. The five are one of the trio that rule the world of men’s tennis. Due to injuries, he has been changing on and off the field. He had a walk-over in the men’s singles semi-final at Wimbledon in late June due to an injury.

In this case, he is playing in the current US Open series. He beat Australian Ringi Hijikata in the first round. He then played against Fabio Fognini in the second round. He lost 2-6 in the first round in this match held today. However, he went on to win the next three sets.

In the fourth set of this match, his racquet hit the tennis court floor while blocking the ball and then hit the nose at the same speed. As a result, he was injured in the nose area and bled. He was lying on the ground for a few minutes after the injury. He was then dressed. After that he captured that set as well. With that victory was his.

“It was a little dizzy at first. Okay now. It hurts a little. He had previously injured his nose with a golf bat. “This is the first time in tennis,” Nadal said after the match. Nadal will play against the national player of Birnas in the third round tomorrow.