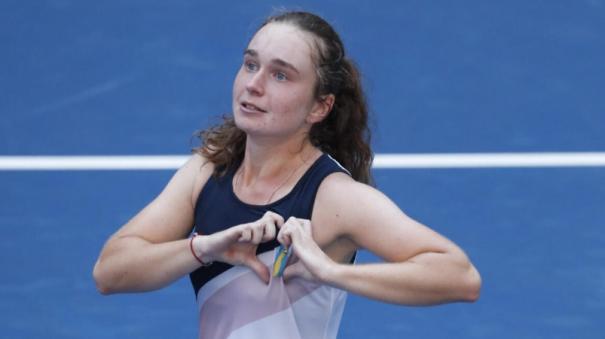 New York: Daria Snigur of Ukraine defeated former number one Simona Halep of Romania in the first round of the US Open tennis series. Meanwhile, Greece’s Tsitsipas, who was ranked 4th in the men’s category, suffered a shock defeat.

The US Open, the last Grand Slam of the year, kicked off last night in New York. In the men’s singles first round, No. 4 seed Stephanos Tsitsipas of Greece took on qualifier Daniel Halen of Colombia. In this match, which was held for 2 hours and 48 minutes, Daniel Halan defeated Chitsibas 6-0, 6-1, 3-6, 7-5 and advanced to the 2nd round.

Dariasnikur shed tears of joy after defeating Halep. She then made a heart shape with her hands wrapped around the Ukraine ribbon on her dress and showed it to the fans. Daria Snikur says about the win, “I am very nervous. I tried to do my best. “I want to thank everyone for Ukraine and for my family.”

In another match, 23-time Grand Slam champion Serena Williams of the United States defeated Tanga Kovinic of Montenegro 6-3, 6-3 in straight sets. 23 thousand fans witnessed this match in the stadium. The 40-year-old Serena is set to retire from tennis with the series.