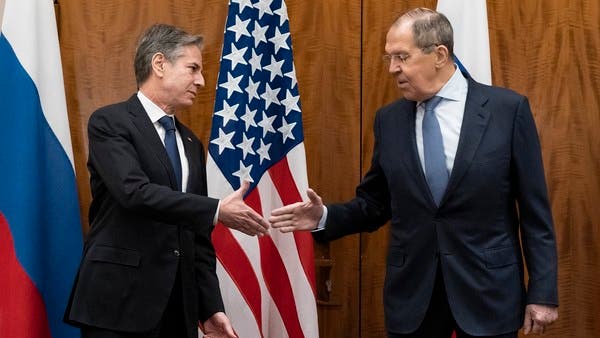 Russian Foreign Minister Sergei Lavrov assured his US counterpart, Anthony Blinken, at the start of talks between them that are considered crucial to defuse the Ukraine crisis, that he does not expect a “breakthrough”.

As they sat face to face, Blinken Lavrov promised, at the start of the talks, which is expected to last about two hours, a “united, swift and firm” response if Russia invaded Ukraine, but stressed that the United States continues to seek a diplomatic solution.

It is also expected that the duration of the meeting, which will be held in one of the palaces overlooking Lake Liman, will not exceed two hours, after which each of the two ministers will make statements separately before the press.

Lavrov and Blinken, who knew each other well, shook hands around 10:00 GMT and got straight to the point even before the journalists were called out of the room.

It is noteworthy that this meeting is the latest step in an intense diplomatic process that began 11 days ago in Geneva between their two aides.

Washington suspects that Moscow intends to invade Ukraine, while the Kremlin denies having any intention of doing so, despite keeping about 100,000 soldiers along the border with its neighbor.

“Don’t be afraid of anyone”

It is reported that US Assistant Secretary of State Wendy Sherman tweeted at night that the Americans and their allies had extended their hand, but “so far our goodwill steps have been rejected.”

“Russia is not afraid of anyone, not even of the United States,” her Russian counterpart, Sergei Ryabkov, told reporters in English from the hall where the meeting is being held on Friday, in response to a question posed by a reporter about what Russia fears.

Ryabkov also added in Russian that “the US attempt to increase tensions yesterday and the day before yesterday does not create the necessary atmosphere” for the talks. He continued, “We will try to get the Americans to change their tone, and urge them to act according to our agenda, on security guarantees.”