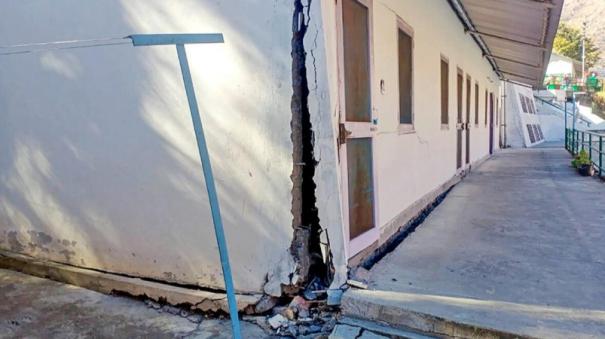 Dehradun: Chief Minister Pushkar Singh Thami is going to Joshimath today (Saturday) to inspect the damage caused by cracks in houses and temples in Joshimath city area. He also ordered the evacuation of 600 families from dangerous areas there.

About 570 houses, temples and roads in Uttarakhand’s spiritual city of Joshimath are suffering from ongoing landslides. As a result, 3000 people in that area have been affected. Uttarakhand continues to face natural calamities such as landslides and floods due to climate change and urbanization. Now, houses in the spiritual city of Joshimath are threatened by cracks in the roads. In this case, a temple there collapsed on Friday evening. Cracks are increasing in many houses.

State Chief Minister Pushkar Singh Thami will visit Joshimath today to witness the increasing damage and take necessary measures. The chief minister has ordered the evacuation of 600 families from the dangerous area.

Pushkar Singh Thami said, “Our primary objective is to save lives. The authorities have been ordered to immediately evacuate 600 families living in the most dangerous area of ​​Joshimath to safer areas. Urgent, long-term and immediate plans should be made regarding this divorce. Helicopters and medical teams should be ready to evacuate people. “A disaster management control room should be set up in the affected city. Adequate presence of state and national disaster management personnel has been ordered there. Helicopter facilities have also been arranged to evacuate the affected people,” he said.

Meanwhile, the central government has constituted an expert committee to study the landslide in detail. Officials said that the inspection team will study the impact of the cracks on residences, buildings, highways, infrastructure and water bodies.

Local residents blame these impacts on climate change and ongoing infrastructural developments. Experts have said that this change has occurred due to various factors of human activities and natural change. Kalachand Sain, director of the Wadia Institute of Himalayan Geology, said, “The reasons for the conservation are not recent. It has been there for a long time.”

The city is considered as the gateway to the holy Badrinath Yatra, trekking, valley of flowers etc. in the Himalayas. Jyotirmad here is one of the important religious institutions considered to be the birthplace of Hinduism. Also, there is a military base’s cantonment near the Chinese border.

Asia’s largest ropeway, the Auli Ropeway, has been suspended due to the crack. The work of the National Thermal Power Company has also been stopped as a precautionary measure.