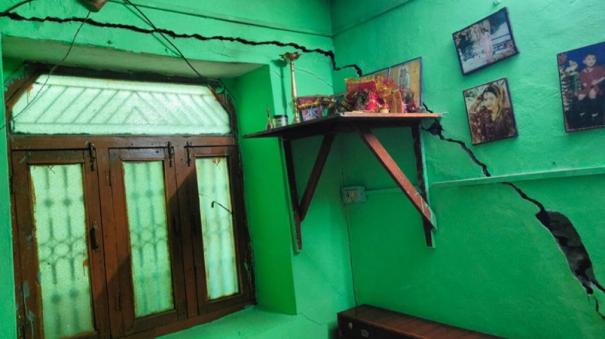 Joshimath: A series of landslides in Joshimath town of Uttarakhand has resulted in cracks in around 570 houses there. Officials have said that state Chief Minister Pushkar Singh Thami will visit the affected areas and take necessary measures.

Around 570 houses in Uttarakhand’s spiritual town of Joshimath have suffered cracks due to ongoing landslides. 60 families have vacated their homes due to landslides caused by climate and infrastructural changes. Officials said on Wednesday that 29 families have been shifted to safer places. About 500 families are living in precarious conditions, still in cracked houses or elsewhere in the cold.

3,000 people were affected due to the cracks in the houses. This is 10 percent of the population in the area. All houses are inspected by the municipality. Many people have left their homes, the mayor said.

A team from IIT Roorkee is working with experts in the city to prepare a report on the impact and present it to the Chief Minister. Now the roads have also started to crack. All the 9 blocks in this politically and spiritually important Himalayan city are affected by cracks. This vulnerability is starting from the 3rd block.

In this situation, the Chief Minister of the state Pushkar Singh Thami said, “I will visit Joshimath city in person soon and take necessary steps to handle the situation. All the reports regarding it will be studied and all necessary steps will be taken. I have inquired about the situation with Joshimath Municipal Chairman Shailendra Pawar.”

“We have been demanding for the last one year that we should be relocated immediately, but no one is listening. Now the cracks are getting bigger in Joshimath. People have fenced their houses with bamboo poles and covered them with rags. The state government is not doing anything,” said the coordinator of Save Joshimath movement. Atul Sati said.

Madhavi Sati, one of the victims, said, “I have no option but to live in this cracked house. The District Magistrate of Chamoli has come and inspected the place but no decision has been reached yet.”

Meanwhile, the Disaster Management Department has reported that underground water seepage has occurred in the earthquake-prone areas. The District Magistrate of Chamoli has appointed Associate Justice Deepak Saini to monitor Jyothiram’s condition and take necessary action.

A group consisting of representatives of Joshmad Nagar traveled 300 km from there. has gone to the distant state capital. There will be a meeting with the Chief Minister and a request to arrange a rehabilitation place for the people affected by this problem.

The city is considered as the gateway to the holy Badrinath Yatra, trekking, valley of flowers and many other places in the Himalayas. Jyotirmad here is one of the important religious institutions considered to be the birthplace of Hinduism. Also, it is noteworthy that there is a cantonment of a military center near the Chinese border.