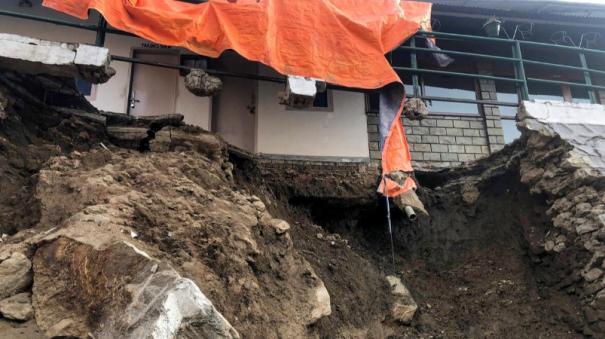 Joshimath: of Uttarakhand Jyotirmad Shankaracharya Avimukteshwaranand Saraswarathi has blamed the cracks in buildings and land in Joshimath city on activities carried out in the name of development.

Jyotirmadam is one of the monasteries founded by Adi Shankara. Located near Kedarnath in the northern direction of the country, this monastery is called Joshimath. The city is named after this monastery. It is in this city that there are now cracks in buildings and land. Consequently, the people here are being evacuated to safer places.

In this case, Jyotirmad’s dean Shankaracharya Avimukteswaranand Saraswarathi, who commented on this damage, said, “This is due to the planned destruction activities carried out in the Himalayan areas in the name of development projects. Thousands of people live in Joshimath. India’s cultural city is now under threat. Uttarakhand government should protect the people living here and their property.

Financial assistance should be given to the affected people. People should be taken to safe places. The Narasinghe temple here is also affected. These damages are due to the development works carried out in the hilly areas. The government should have realized this earlier. They are just now paying attention. The Chief Minister is currently taking appropriate steps,” he said.

Meanwhile, Chief Minister Pushkar Singh Thami, who visited Joshimath and personally inspected, said that efforts have been made to find out the real cause of these damages. He said that he has spoken to IIT Rourke and ISRO about this and they will find out the reasons behind these incidents. Chief Minister Pushkar Singh Thami has said that the safety of the people here is very important and the government is taking measures for that.

What is the problem? – According to the last 2011 census, Joshimath has a population of 16,709. There are more than 7,600 houses and shops. Over the past few weeks, various parts of Joshimath have been hit by landslides and cracks in houses. 570 houses have extensive cracks. There have also been explosions on roads. Due to this, the people of Joshimath are vacating their houses and leaving. Read More > Joshimath is a ground-level town on the Rishikesh-Badrinath National Highway in Uttarakhand.