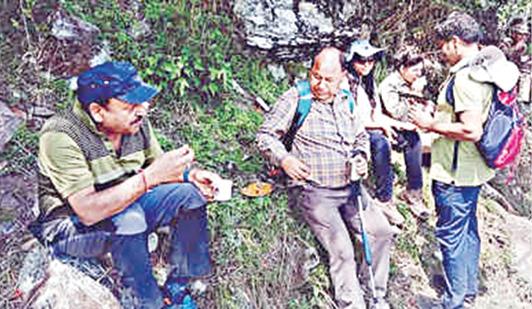 Dehradun: There are polling stations in difficult mountainous areas, rivers and even dense forests when elections are held in the country. Polling officials are going through many difficulties, especially to the places where the tribals live. In this context, Chief Election Commissioner Rajiv Kumar yesterday traveled 18 km to visit a remote polling station in Uttarakhand. Went uphill in the distance.

Tumak is a village located in the Samoli district of Uttarakhand. This village. This area is the last remote village in the state. Chief Election Commissioner Rajiv Kumar arrived in Bipalkoti by helicopter yesterday. From there he drove to Kimana village. After that Rajiv Kumar had to drive 18 km as there was no road. Went to the mountains. Went to the government college there. This is where the polling booths are usually set up in the Tumak area of ​​the Badrinath Assembly constituency. Every election official comes to this government college with great difficulty.

There are a total of 290 voters here. In the recent election, 80 percent of the vote was cast here. Commenting on the visit, Chief Election Commissioner Rajiv Kumar said:

Many polling stations in the country are inaccessible. There are many dangers in reaching those places. Officials who go to work at such polling booths will be considered for giving ‘Heartship Allowance’ to the employees. It will also look into providing insurance for all those going to the polls, such as polling stations along the border with Pakistan, polling stations in areas affected by terrorism and Naxals, and polling stations in difficult mountainous areas. I made this trip to encourage people to work in places like this.

People come and vote hard in the inaccessible Tumak area. They are an example to voters in other cities in the country. Thus said Rajiv Kumar.

Rajiv Kumar is interested in trekking. Already, he has been to the Himalayas. -PTI