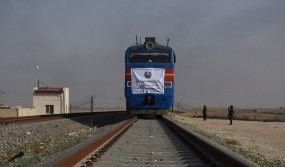 Digital Desk, Kabul. Uzbekistan has provided 3,700 tonnes of humanitarian aid to war-torn Afghanistan in an effort to help millions of people amid the bitter cold. The 63 were transported by rail wagons to the northern city of Mazar-e-Sharif in Afghanistan and received by Afghan authorities, Xinhua news agency reported.

This batch includes food items, fuel and winter clothes, which will be distributed among destitute Afghans. Let us tell you that the country is going through an economic crisis. Expressing gratitude to Uzbekistan, Sher Mohammad Abbas Stanikzai, deputy foreign minister of Afghanistan’s Taliban-led government, called for further enhancing ties between Kabul and Tashkent. Stanikzai called on Uzbekistan to help Afghanistan by rebuilding airports, building railways and providing scholarships for Afghan students.

Afghanistan has been facing an economic crisis since the takeover of Afghanistan by the Taliban in August that resulted in the departure of US-led forces and the imposition of sanctions on the new administration, which has reportedly caused more than 22 million of the country’s roughly 36 million population. facing acute food insecurity. The Afghan government has called on the international community to provide humanitarian assistance to overcome the crisis. So far, many countries including China, Saudi Arabia, Uzbekistan, Qatar have provided humanitarian aid to the country.