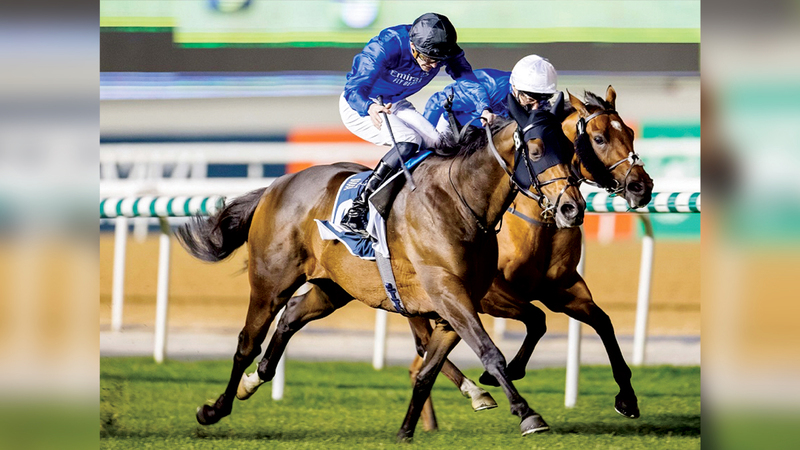 The horse, “Valent Prince”, gifted the “Godolphin” world team the historically ninth title in the “Al Rashidiya” championship for purebred horses “Group 2” for a distance of 1800 meters, grass, and it took place yesterday through the fifth round and the main in the second races of the new season of the “Dubai World Cup Carnival”. », which was organized by the Dubai Racing Club, and its seven runs were sponsored by «Azizi Real Estate Development», with a total prize pool of $750,000. 74 elite local and international horses competed for their titles.

And the “Godolphin” horses continued their supremacy, by snatching the “hat-trick” and recording three victories out of the seven runs. In addition to the title of “Valent Prince” in Al Rashidiya, the Persians “Soft Whisper” under the supervision of international trainer Saeed bin Suroor crowned the title of the first edition of the “Epi” race. The Tombi Stakes” for fillies and mares, which took place in the fourth round for a distance of 1400 meters grass, before her colleague in the stable “Electrical Storm”, under the supervision of coach Bin Surour, added the title of the seventh and final round for a distance of 1600 meters grass for the “Handicap” category.

“Valent Prince” crossed the finish line, led by jockey James Doyle, in first place, with a time of 46 seconds and 92 parts of a second, and won the main prize of $180,000, outperforming by 0.75 lengths from “Dubai Future” under the supervision of international coach Saeed bin Suroor and the leadership of jockey Daniel. In the rest of the results, the horse “Royal Muse” for “Diva Racing” and the supervision of coach Bobat Semar opened the first victories, by winning the first half title that ran for a distance of 1600 meters sandy for the “Handicap” category, before the Kuwaiti filly “Al-Dasim” gifted its owner, Sheikh Abdullah Al-Malik Al-Sabah, and trainer George Boggi won the title of “Al-Wasl Stakes Challenge” for a distance of 1600 meters, for three-year-old horses.

The “Tiger Nation” pony excelled with the slogan of His Highness Sheikh Hamdan bin Mohammed Al Maktoum, and the supervision of coach Salem bin Ghadeer, to win the preparatory race for the “2000 UAE Guineas”, which was held in the third half for a distance of 1400 meters sandy, and the title of the first edition of the “Challenge” race went Thunder Snow” for the horse “Salute the Soldier” for “Victoria Racing”.