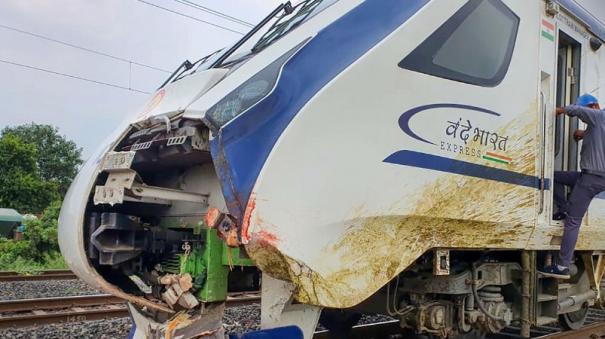 Maninagar: In Gujarat An FIR has been registered against the unidentified owners of the dead buffaloes as the front end of the Vande Bharat train was damaged after it collided with the buffaloes.

Vande Bharat train was traveling between Wadhwa and Maninagar railway stations on Thursday when the train ran into four stray buffaloes on the tracks, damaging the front end of the locomotive. At the same time, the buffaloes died in the accident.

Further, it has been informed that the Railways has taken all measures to prevent such incidents in the coming days.

Earlier, Vande Bharat Express was running between Gujarat capital Gandhinagar and Mumbai. This modern train can reach a speed of 100 kmph in about 52 seconds. It can reach a maximum speed of 180 kmph. This train will travel from Gandhinagar to Mumbai within 6 to 7 hours. It has facilities like Wi-Fi, 32 inch TV. This train was started on 30th of last month. It is noteworthy that Prime Minister Modi started this service.