Varosha crisis.. Cyprus and Greece: the coming days will be decisive حاسم 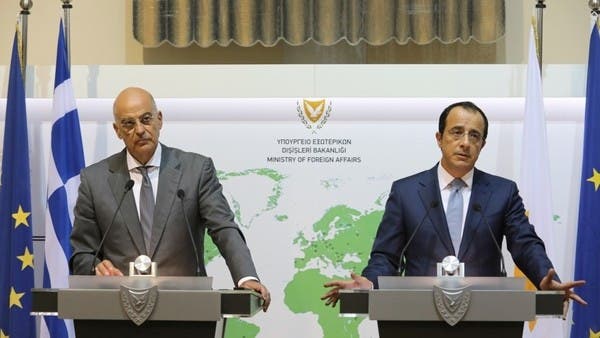 
The foreign ministers of Cyprus and Greece said they were coordinating the next steps “and the coming days will be decisive.”

After a meeting with his Greek counterpart, Nikos Dendias in Nicosia, on Wednesday, Cypriot Foreign Minister Nikos Christodoulides expressed his rejection of Turkey’s solutions to the Cyprus problem.

“The provocative measures taken by Turkey in occupied Cyprus are aimed at promoting other forms of solutions to the Cyprus problem, which neither we nor the international community will accept,” Christodoulides was quoted as saying by the Cyprus News Agency.

The agency added that the two ministers denounced the “provocative statements” issued yesterday, Tuesday, in the context of Turkish President Recep Tayyip Erdogan’s visit to the “occupied Cypriot territories”, especially with regard to the Varosha region. The two sides emphasized “coordinating the next steps” to respond to Erdogan’s visit, and the Cypriot foreign minister indicated that the coming days would be “decisive.”

For its part, the Egyptian Foreign Ministry expressed, on Wednesday, its deep concern over what was announced regarding the change in the status of Varosha region in Cyprus, stressing its demand for the necessity of complying with Security Council resolutions.

In a statement, she stressed the need to avoid any unilateral actions that might complicate the situation and increase tension in the region.

On Tuesday, Turkish President Recep Tayyip Erdogan stressed his adherence to a two-state solution in Cyprus, in a strongly worded speech he delivered during a visit to the northern part of Cyprus on the 47th anniversary of the Turkish invasion that led to the division of the Mediterranean island.

“We don’t have 50 years to waste,” he told a crowd during a military parade in the northern part of the capital, referring to decades of UN-sponsored negotiations that failed to unify the Greek and Turkish Cypriot parts of the island.

He added: “It is not possible to make progress in the negotiations without recognizing the existence of two peoples and two states.”

He considered that “a new negotiation process can only be resumed between two countries,” adding, “For this, the sovereignty and equal status of the Turkish Cypriots must be confirmed, and this is the basis of the solution.”

Amid cheers from the crowd waving Turkish flags, Erdogan accused the Greek Cypriot authorities of “blocking any solution” by adopting an “extremist approach detached from reality.”

He dismissed a warning this month from European Commission President Ursula von der Leyen that Brussels “will not accept” a two-state solution for Cyprus, a member of the European Union.

Washington condemned Turkish President Recep Tayyip Erdogan’s announcement to reopen Varosha, the ghost town in eastern Cyprus, which was abandoned by its original Greek Cypriot residents nearly half a century ago, and the Turkish Cypriots today, with the support of Ankara, want to reopen it under their administration.

“The United States considers the actions of the Turkish Cypriots in Varosha, with the support of Turkey, to be provocative, unacceptable, and inconsistent with the commitments they made in the past to engage constructively in peace talks,” US Secretary of State Anthony Blinken said in his statement.

For his part, French Foreign Minister Jean-Yves Le Drian expressed his support for Cyprus, stressing that he had discussed the matter with his Cypriot counterpart, and that he would raise the issue at the United Nations, accusing Erdogan of “provocation.”

“France deeply regrets this unilateral, uncoordinated and provocative step,” he said in a statement, adding that “it undermines the restoration of confidence necessary for the urgent resumption of negotiations for a just and lasting solution to the Cyprus issue.”

Sex in a car under the influence of drugs; The Uber driver and the young woman suffocated to death

Spartak turned to fans after defeat by Rubin

Ethel Pozo tells how Julián Alexander proposed to her: “It was at sea”