Victory defeats Damak and achieves its fourth victory in a row 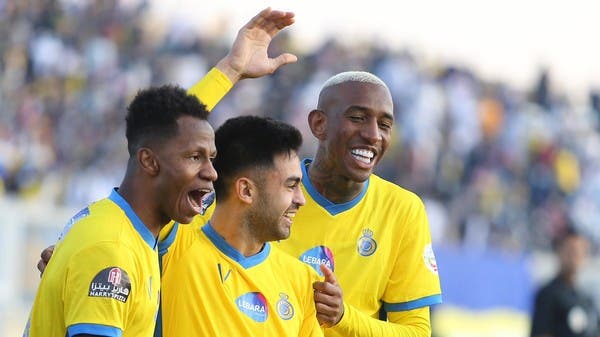 Al-Nasr continued its series of victories by achieving its fourth victory in a row, defeating its host Damak 2-0, in the confrontation hosted by Prince Sultan bin Abdulaziz City Stadium in Mahalla, in the 16th stage of the Mohammed bin Salman Professional Cup League.

Al-Nassr managed to continue its strong performances since Argentine Miguel Rosso took over the team’s training, where he achieved his fourth consecutive victory in the league.

The match witnessed an advantage for Al-Nassr, who waited until the 19th minute, when his Brazilian top scorer Anderson Talisca scored the first goal when he fired a powerful ball from outside the penalty area that landed in the net of Dhamk.

In the last five minutes of the first half, Damak intensified his attack and his striker Mazen Abu Sharara almost scored the equalizer when he rose to the cross of his colleague Abdulaziz Majrashi and turned the ball with his head, but it found goalkeeper Walid Abdullah, who narrowly missed it.

Damak continued his attack, and his Algerian striker, Hilal Soudani, had a real chance when he broke through the victory defense and hit the ball strong, but it found goalkeeper Walid Abdullah, who pushed it away with difficulty.

At the beginning of the second half, Argentine coach Miguel Rosso, Al-Nasr coach, pushed the duo, his compatriot Betty Martinez and the Brazilian Anselmo as substitutes for Ayman Yahya and Ali Al-Hassan.

Argentine Betty Martinez scored the second goal for Al-Nassr at the 51st minute, after completing the pass of his colleague Abdel Fattah Adam with his foot into the net of Damak.

With this result, Al-Nasr’s balance rose to 29 points to maintain the third place, 6 points behind Al-Ittihad Jeddah, the league leader, and Damak’s previous balance of 26 points, to remain in the fourth place temporarily, two points behind the fifth Al-Hilal, which will face Al-Taei on Tuesday at the end of the stage.