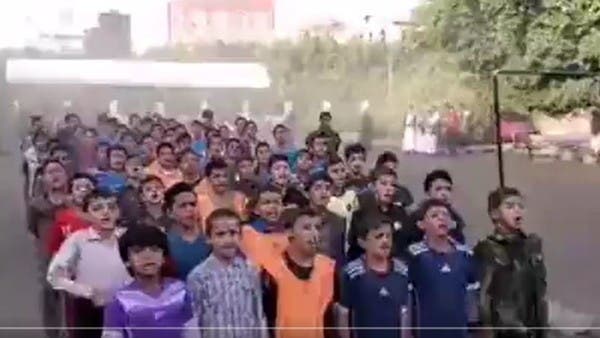 On Saturday, Yemeni Minister of Information Muammar Al-Eryani published scenes from the camps set up by the Iranian-backed Houthi terrorist militia to lure, recruit and train children under the age of 10, describing them as “shocking”.

The Yemeni Minister of Information confirmed, in tweets on his Twitter page, that the terrorist Houthi militia continues to recruit children under the cover of what it calls “summer centers” in preparation for their involvement in various fighting fronts under the UN truce, and in response to efforts to calm down, end the war and establish peace.

1- A shocking scene of one of the camps established by the terrorist Houthi militia affiliated with Iran to lure, recruit and train children under the age of 10 under the cover of what it calls “summer centers” in preparation for their involvement in various fighting fronts under the UN armistice, and in response to the efforts to calm down, end the war and establish peace pic.twitter.com/7GGR9yaeX7

Al-Eryani indicated that the terrorist Houthi militia has recruited children in the areas under its control and pushed them to the lines of fire in light of a surprising and unjustified international silence, criticizing the failure of human rights and child protection organizations and bodies to play their role in condemning this heinous crime, and stopping the operations of what he called “killings.” group for the children of Yemen.

The Yemeni Minister of Information called on the international community, the United Nations, and the UN and American envoys to take clear positions on the Houthi terrorist militia’s escalation of child recruitment, to exert real pressure to stop it immediately, and to prosecute those responsible for it from the leaders and elements of the militia and bring them to trial as “war criminals”.

Earlier, two Houthi officials told the Associated Press that the Houthis had recruited several hundred children, including 10-year-olds, in the past two months, and deployed them to the front lines as part of a mobilization of forces during the UN-brokered truce, which has held since last April. .

The two Houthi officials, whom the agency described as “hardliners,” said they saw no problem with the practice, and argued that boys as young as 10 or 12 were considered men.

One of them added, “They are not children. They are real men who should defend their nation,” as he put it.

The two Houthi officials stipulated that they speak with anonymity to avoid clashing with other Houthi leaders.

The Houthis used what they call “summer camps” to spread their religious ideology and recruit boys to fight. Such camps were set up in schools and mosques throughout the areas under their control in Yemen, especially the north and center of the country and the capital, Sana’a.

About 2,000 children recruited by the Houthis were killed on the battlefield between January 2020 and May 2021, according to United Nations experts.