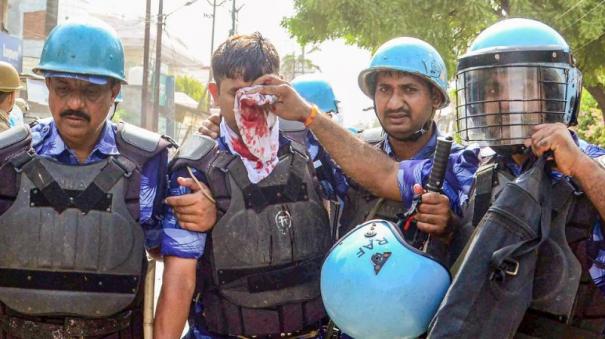 New Delhi: As protests and violence erupt in many parts of the country in the aftermath of the Nupur Sharma controversy, the Union Home Ministry has issued a stern warning to state governments to take appropriate action in this regard.

Many Muslim countries have condemned India for Nupur Sharma’s controversial remarks about the Prophet Muhammad. Information was spread through social media in the Gulf countries that Indian products should be rejected. Subsequently, the Central Government replied that Nupur Sharma’s opinion was not that of the Government of India.

Following this, the BJP suspended Nupur Sharma and expelled Naveen Jindal from the party. The BJP also advised party leaders to act responsibly when expressing their views in public.

In this context, Islamists in Delhi, Uttar Pradesh, West Bengal, Gujarat and Jharkhand staged protests against Nupur Sharma’s remarks. Violence has also been reported in Jharkhand and West Bengal. 144 restraining orders have been issued in tense areas.

The Union Home Ministry has said it is monitoring the violence across the country amid mounting protests, including the arrest of Nupur Sharma. It also said it was advising state governments on how to contain the unrest.

In addition, the Union Home Ministry has directed the police to provide adequate security. This information has been confirmed by a senior Home Ministry official to ‘The Hindu’ (English) daily.

Union Home Minister Amit Shah is on a three-day visit to Gujarat. Amit Shah is expected to attend a consultative meeting on the forthcoming Assembly elections in Gujarat this year.