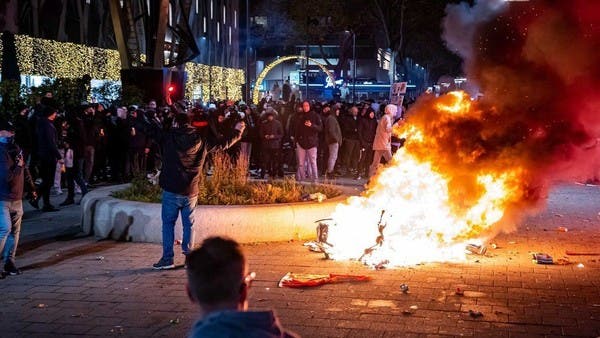 Dutch police opened fire on demonstrators, and seven people were injured in a riot that broke out in downtown Rotterdam during protests against Corona restrictions on Friday.

“The police shot the protesters, and people were injured,” Abu Talib said. The police also fired warning shots to stop the violence of the protesters and opened water cannons on them.

Abu Talib stated that a number of policemen were also injured in the violence. Twenty people have been arrested so far, and more are expected to be arrested after examining the videos taken by security cameras.

Pictures from the scene showed at least one police car set ablaze, and another whose windshield was hit by a bicycle.

Police units from across the country rushed to Rotterdam to help control the situation on Friday night. Local media reported that gangs of rioters at football matches were involved in the riots.

It was one of the worst outbreaks of violence in the Netherlands since the coronavirus restrictions were first imposed last year. In January, rioters attacked police and set fire to the streets of Rotterdam after a curfew came into effect.

For his part, Justice Minister Fred Graberhaus condemned the events, saying in a statement: “The riots and extreme violence against police officers, riot police and firefighters last night in Rotterdam are disgusting.”

“Protesting is a great right in our society, but what we saw last night is criminal behavior that has nothing to do with protesting,” he added.

In turn, the local political party “Levbar Rotterdam” condemned the violence in a tweet on “Twitter”. “The center of our beautiful city this evening has turned into a war zone,” he said. “Rotterdam is a city where you can disagree with the things that happen in it, but violence is never the answer.”

The protesters had gathered to protest against government plans to prevent entry to closed places for those who do not have a health pass, a passport that shows that they have received a corona vaccination or recovered from it. Those who have not received the vaccination may also possess this passport, provided they provide proof that they are free of disease.

The country has witnessed record numbers of corona infections in recent days, and a new partial closure entered into force a week ago.

And the Netherlands re-imposed some closure measures early last week for an initial three weeks, with the aim of combating an increase in infections.

The authorities recorded more than 23,000 new infections on Thursday, and the previous highest daily rate was recorded in December 2020, which amounted to 13,000.