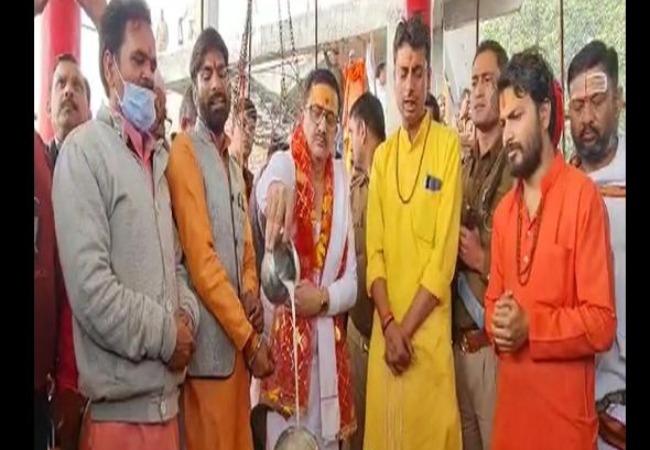 New Delhi: Waseem, former chairman of the Shia Waqf Board who converted to Islam under the name of Jitender Narayan Singh Tiyagi Rizvi On Uttarakhand Police case record Have done. He is Haridwar Sadhus The case has been registered for inciting violence in the assembly.

Wasim Rizvi, former chairman of the Shia Waqf Board in Uttar Pradesh. The man, who has been speaking out against Muslims, converted to Hinduism last month and changed his name Jitender Narayan Singh Martyr Was changing.

In this case, the quality of Haridwar is Sansad Sadhus Tiyagi addressed the council meeting yesterday. His speech at the time was considered provocative and anti-Muslim.

The martyr’s speech record went viral on social media. Thus, the Haridwar police in Uttarakhand have registered cases of incitement to violence against Tiyagi.

In a Twitter post, Haridwar police said, “Narayan Tiyagi addressed the Dharma Sansad Sabha against a particular religion and incited violence. As a result, a case has been registered against him under sections 153A of the IPC and an investigation is underway.

Meanwhile, All India Ittahadul Muslim Party leader and Hyderabad MP Asaduddin Owaisi has issued a statement condemning Narayan Tiyagi. He has also instructed his party’s Uttarakhand state president to lodge a complaint against Tiyagi at the police station.

Who is this Rizvi?

Waseem Rizvi is considered to be the main leader of the majority Shia sect in UP. This made him the chairman of the Shia Muslim Central Waqf Board in UP.

Since then, Rizvi has spoken out in support of Hindutva organizations. He also continued to praise Prime Minister Narendra Modi and campaigned in support of the Ram Temple on the Ayodhya issue.

For similar reasons and against him, the Sunni Muslims had given Rizvi a ‘fatwa’ as a non-Muslim. By the Shia sect Muslims who belong to them Rizvi The level of hatred began.

In this situation, on December 6, he converted to Hinduism. He had now vowed to promote his Hindu religion in the country and to defeat the Muslims who voted against Hindus in politics.

He had a few months ago told the Supreme Court that extremism was taught in 26 pages of the Holy Quran and demanded that it be removed. It is to be recalled that the bench of judges dismissed the welfare case and imposed a fine of Rs. 50,000 on Rizvi.

Chiranjeevi: The news that gives a kick to the mega fans.. The stage is set for the arrival of ‘Godfather’