Wasps still everywhere, what do you do about them? 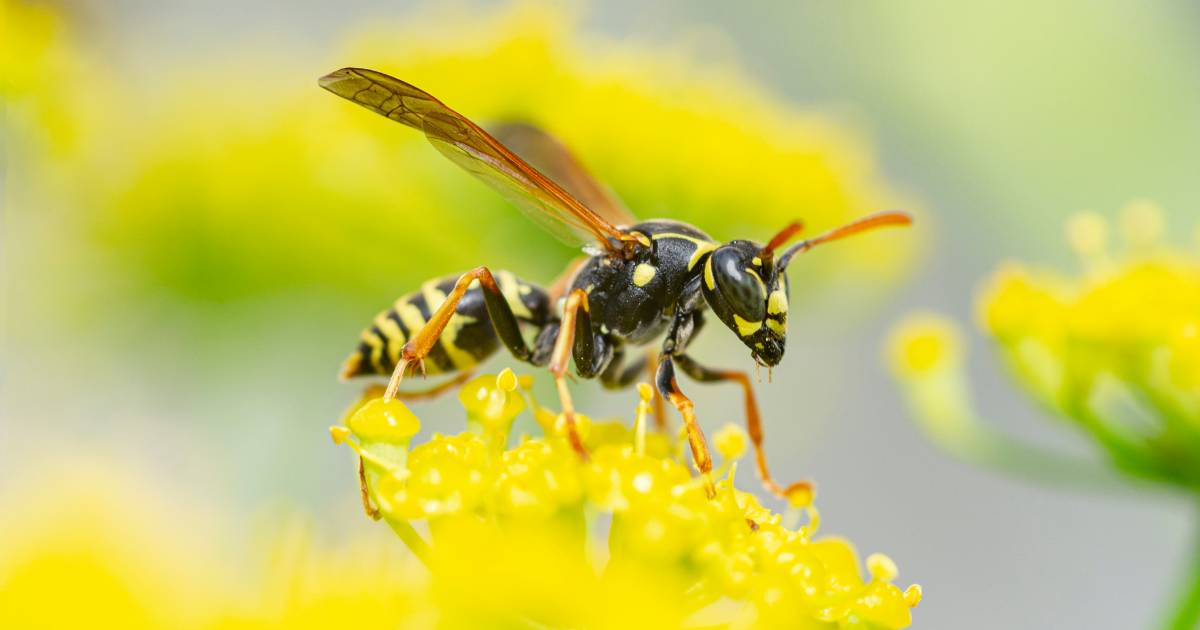 Cleaning tip of the weekThe house could use a major overhaul once in a while. Cleaning expert Marja Middeldorp therefore helps to solve everyday problems. This week: tips to keep wasps away from you.

,,There are a lot of wasps this year, and oh oh oh what do we do about it? We decided not only to write an article about it, but also to make a video with three golden tips. I had already devised a beautiful scene, outside in the garden, in the sun… But guess what: on the day itself it came pouring out of the sky. It was pouring rain! That’s why we recorded the video in the hall. I tried to conjure up the atmosphere of Italy there, but no: not a wasp in sight!”, Marja chuckles.

That was not easy, but that brings the cleaning queen to her first tip. “We stay indoors with rain, but wasps also prefer not to go out in wet weather. So fill your plant sprayer with water and place it next to you on the garden table. Wasp coming? Spray it! He will soon return to his own house.”

“Some people put down a bottle with something sweet like lemonade so they can catch the wasps. Well, I don’t get that complicated,” says Marja. ,,I just put a bowl with something sweet, such as overripe fruit, in front of them – without a fall. The wasp can eat its belly and then really doesn’t feel like stinging you. You happy, wasp happy.”

If you prefer not to have them near you at all, Marja advises to use bitter odors. “Wasps, and many other critters too, do not like bitter smells, such as cloves, sage and garlic. Just like sour smells like lemon and vinegar. So you can also put this on a plate. But if you want to make it something cozy, go for a mint plant. This also keeps the wasps at a distance, it looks nice on your garden table and you can regularly cut off a twig to use yourself. For example, put such a twig in a carafe with water and ice cubes. The wasps stay away, and you have a nice fresh water. Perfect!”

A well-known tip is to hang a plastic bag with water. The flickers keep the wasps away from you, but Marja has a better tip for that. ,,Use old CDs! You hang it much easier. And CDs can’t burst, a bag of water can. Will you just see that bag burst and you’re soaking wet under it, and those wasps are laughing!”

,,Well, enough tips to keep the wasps away from you. But the most important tip I learned from my father: just sit quietly and don’t wave your arms wildly. We can think of and do all kinds of things, but that wasp doesn’t feel like stinging at all.

“If you stay calm, the wasp will stay that way too. Unlike mosquitoes, which sting all the time, wasps have better things to do. They will fly away on their own, and you can admire them in the meantime. Because I actually think they’re just really beautiful creatures. And they do useful work too! Especially now in late summer they are important pollinators and provide new flowers. And they eat mosquitoes. That’s a good thing, because that buzzing of mosquitoes around you: that’s annoying!”

Do you want to ask Marja Middeldorp a question? Send an e-mail to this address (wonen@dpgmedia.nl) with your name.