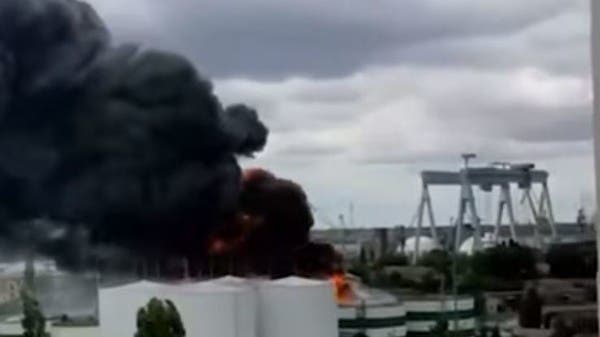 As part of the second phase of the Russian military operation in Ukraine, which began targeting the east and south after the capital Kyiv, photos published by a local emergency service revealed today, Thursday, that a Russian missile attack caused severe damage to at least two sunflower oil tanks at a station in the Ukrainian port of Mykolaiv on Black Sea.

The pictures showed smoke rising from one of the tanks after the top of it was blown off due to the explosion.

The nearby tank, which was also severely damaged, appeared blackened by the fire.

While the local emergency service did not reveal the name of the station, but the international grain trade company Vitera announced on Wednesday that its station in Mykolaiv had caught fire after it was hit in an attack.

It is noteworthy that the targeted port is one of the main Ukrainian ports on the Black Sea, which has been closed since the start of the Russian military operation on February 24.

Since its withdrawal from the vicinity of the capital, Kyiv, last March, Moscow has launched the second phase of its military operation, which it described as the task, in the east and south of Ukraine.

It has intensified its strikes with the aim of controlling the Donbass region, which is of great importance to the Russians, especially since full control of it, especially after they tightened their grip on the city of Mariupol in the southeast of the country, will open the land route easily between the east and the Crimea, which Russia annexed to its territory in 2014. .