Watch .. a Saudi catches a shark with an angler in Dammam Corniche 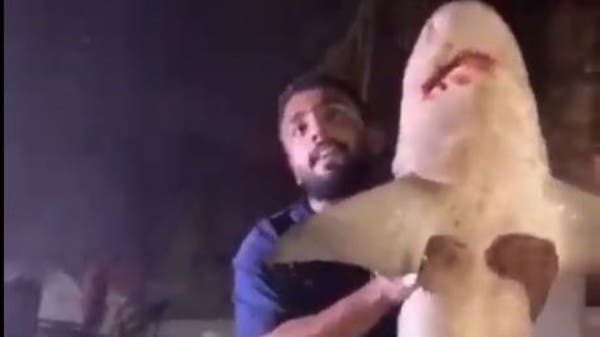 Social media was buzzing with a video of catching a shark from the Dammam Corniche, and the video spread on social media, and comments were poured out expressing the tweets’ amazement at the young man’s ability to catch a shark of this size using a rod.

A video clip documented a young man catching a shark using a “rod” in front of the Dammam Corniche beach.

The video showed the young man dragging a medium-sized white shark on the beach after catching it with a line.

The young man said during the video: “God willing, God bless.. this shark is on the Dammam Corniche,” referring to the huge size of the fish, as he raised it up, saying: “See how big it is.”

Sharks are considered sea fish, most of them are predatory and some are not, and there are many forms and types and live in most of the seas and oceans of the world, and sharks differ from each other in body shape, size, habits, behavior and food.

Through fossils, 2,000 species of sharks have been discovered, half of these species have become extinct, some of them are very different from the traditional form that we know about sharks, for example, some of them are almost flat and live at the bottom of the sea, while others look like strange alien creatures that live at great depths.