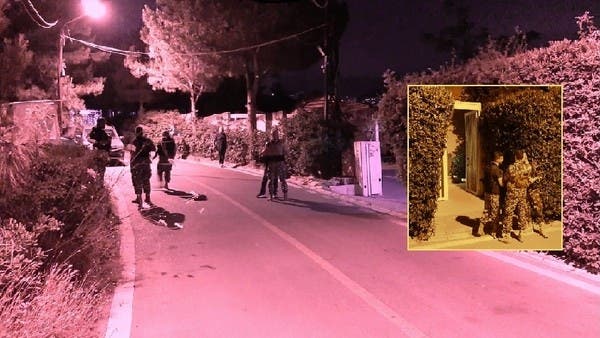 At the time, yesterday evening, Tuesday, a local television station was conducting an interview with the Governor of the Central Bank of Lebanon, Riad Salameh, members of the Internal Security Forces were heading to where he owns a house in the town of “Al-Rabieh”, 13 kilometers from Beirut, to arrest him in implementation of a summons issued against him by the plaintiff. General in Mount Lebanon, Judge Ghada Aoun, according to what was reported in the local media as urgent news.

And the security force members raided the vicinity of the house when they reached it in the middle of the darkness, according to what is evident from the video presented by “Al Arabiya.net” below, in which they appear at the entrance to the house, while it was not officially reported that he had been arrested for interrogation on charges of embezzlement of public funds. and money laundering.

For this very reason, the members of the force were unable to enter the house, because its owner “has not been in it for a long time, but rather lives in another.” Therefore, those who were in it did not respond to them, so they left the place, accompanied by the security official in the house, to testify, knowing that Judge Aoun summoned Salama more than 5 times in less than 10 days, but he submitted each time through his attorney with a legal excuse.

A guarantee of 100 billion pounds

Last May, the Lebanese judiciary released Raja Salameh, the brother of the governor of the Central Bank of Lebanon, nearly two months after his arrest, in exchange for a bail of 100 billion Lebanese pounds, equivalent to 3 million and 700 thousand dollars, and they considered it the highest value in Lebanon’s history. He also confiscated his passport and prevented him from leaving Lebanese territory, and also seized 40 properties he owned in Lebanon, pending the completion of the trial procedures for the brother who was arrested by Judge Aoun on the basis of the Public Prosecution’s appeal against him for the crime of illicit enrichment and money laundering.

The prosecution against Raja Salameh included his brother, the governor of the Central Bank of Lebanon, who did not appear before the investigating judge. Rather, he submitted formal defenses according to which his interrogation session was postponed until this June to complete a local investigation opened by the Lebanese judiciary in April last year regarding Riad Salameh’s wealth and its source.

From the right, Riad Salameh and his brother Raja

An investigation in Switzerland targeted the governor of the Banque du Liban, suspected of his and his brother’s involvement in embezzlement cases of “more than $300 million in a way that harms Lebanon and its central bank,” in addition to that he is also facing judicial complaints in other European countries, including France and Britain.