Watch.. Fight and punches between deputies under the dome of the Jordanian parliament 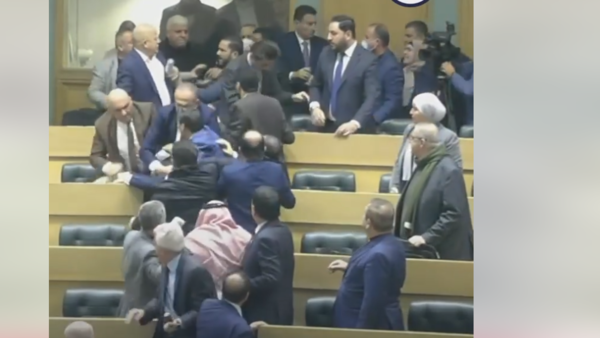 The hall of the Jordanian Parliament has turned into an arena for exchanging punches and beatings, after a dispute between a number of deputies over the constitutional amendments.

At the beginning of the session, the deputies rejected the speech of the head of the Legal Committee, Abdel Moneim Al-Awdat, and the language in which he spoke to the deputies.

The deputies objected to Al-Awdat’s talk, accusing Parliament Speaker Abdel Karim Al-Daghmi of “throwing oil on the fire,” which made the MP reject the accusations of President Al-Daghmi, who became angry and told him to “shut up.”

While the president of the council adjourned the session for half an hour to cordon off the controversy and controversy, and as soon as the session resumed, the fight and beating began.

Representative Hassan Al-Riyati, Shadi Freij and Andrey Hawari exchanged punches, so that the Speaker decided to adjourn the session to another day.