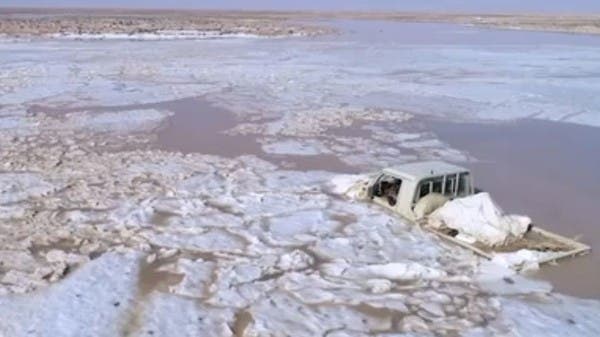 A video clip circulating on social media showed that a number of vehicles sank in torrents east of the city of Qurayyat in northern Saudi Arabia, following the waves of rain and cold that fell during the past two days, and caused some valleys and torrents to run off.

While photographer Abdulaziz Al-Falih kidnapped scenes of vehicles sinking in the torrents that Al-Qurayyat witnessed, he spoke to Al-Arabiya.net by saying: “A group of amateurs documented the beautiful scenes, for their interest and chase for the clouds, and they may travel thousands of kilometers to attend and document such scenes for people from Rain, torrential rain and hail.”

He added: “My friends and I traveled about 450 km from the city of Sakaka to Qurayyat to document this rainy situation, because of our constant interest in moving from one place to another, following the steps of the rain and its effects on the atmosphere.”

In his speech, Al-Falih indicated that the sunken cars were not due to the recklessness of the drivers, but rather as a result of the heavy rain that fell at night, and the owners of these cars left them and asked for help from people after they broke down and the torrent came and covered these cars. The rain was heavy, but the owners of the cars came out safely.

For his part, the weather expert and climate professor, Dr. Abdullah Al-Misnad, commented in his tweet on his account on “Twitter”, saying: “The euphoria of rain and the intoxication of joy in its fall make some people neglect to take the necessary precautions, so the consequences will be dire.”

It is noteworthy that the General Directorate of Civil Defense constantly warns of the need to be vigilant when it rains, and not to sit in or cross torrent streams.

The Civil Defense also advises not to approach pools of water, as their edges are usually collapsible. He also warned that water may cover a drifting bridge or a broken road, so caution and attention are required.