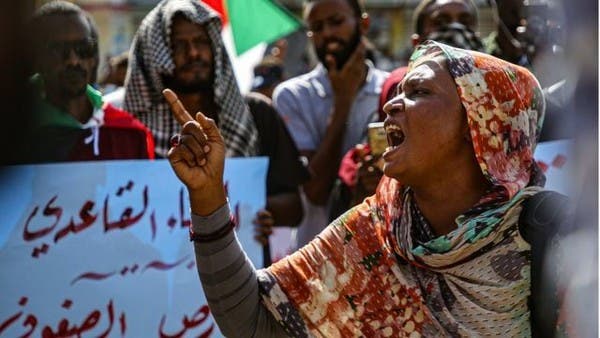 The demonstrations in Sudan have not stopped since the October 25 procedures, demanding the handing over of power to civilians. Just as women were the prominent element in the December revolution that toppled the regime of ousted President Omar al-Bashir, she still retains her firm role in leading processions and demonstrations, for Zaghrouda Kandaka (which is the queen in the ancient civilization of Sudan) , represents the start of the demonstrations whistle.

In addition to her contribution to preparing for each procession days in advance of preparing food and drinks, as well as masks and materials that protect against homemade tear gas (consisting of vinegar and yeast); Women in Sudan lead and advance the demonstrations, and many pictures have appeared recently of young women marching in processions and beating drums, then chanting revolutionary slogans to spread enthusiasm among the demonstrators.

A number of activists circulated pictures of a young woman named “Jojo” as she was leading a procession for high school students, after which she faced a torrent of criticism over her form and method, which prompted her to comment, saying that neither the shape nor the dress gives the right to a person to classify her, on the other hand, many supported her courage and feet and described what she faced. Some of the bullying is totally rejected.

When the demonstrators approach the specified destination, the security forces try to disperse them by firing tear gas canisters, so they return the canisters to the forces in hit and run. This role was limited only to young men until Rebekah Abdul Rahman, known as the “Bamban Hunter”, broke that rule and started racing the youth to carry the canisters, then Bringing it back until it became a natural matter for a large number of young women who are on the front lines, and they take this step steadily.

Women medical staff are also strongly present in providing aid to the wounded and injured, inside the demonstration square at well-known points for the demonstrators that are predetermined. They provide first aid and transport to the hospital those who need to be transported via ambulances, where girls are previously equipped, trained, and then armed with the necessary medical equipment, The identities of the paramedics are deliberately hidden so that they are not subjected to any harassment from the regular agencies. In this regard, Dr. says. Abeer Dirar told Al Arabiya.net: “In the past, there were clinics with clear symbols to identify them, and all medical staff wore uniforms for ease of finding them, but after the security forces targeted these clinics, it became necessary to hide them.”

On the side of psychiatry, Dr. Hind Al-Naim established the “Aman” initiative for mental health, and designated a special section called “Fadhada”, which includes a number of female psychologists to provide the necessary support to those suffering from disorders as a result of the violent scenes that accompany the demonstrations, and with the emergence of allegations of Cases of harassment and rape on the perimeter of the Republican Palace, said d. Hind told Al Arabiya.net: “Due to the sensitivity of this matter, we are working quietly to reach the victims, to provide effective counseling in order to reach the full treatment.”

We retract the gains

A number of voluntary organizations and initiatives specialized in defending women’s rights considered that there was a clear government retraction from the rights that women had taken away in the December revolution. Sulaima Ishaq Al-Khalifa, Director of the Violence Against Women Unit, said: “We will continue to advocate for women’s issues and find alternative solutions in the absence of the rule of law and responsibility. Institutional institutions in many agencies effective in preventing and responding to violence against women.

The leadership of the Sudanese Women’s Alliance, d. Maryam Ezzedine told Al-Arabiya.net: “The situation of Sudanese women has declined, especially after the events of October 25, as represented by violence against women and the violations that appeared in the December 19 processions, which is the first time that such violence has occurred, which led to the fall of martyrs, including children; trust in The justice system, forcing the Sudanese Feminist Alliance to escalate the issue internationally,” she added. Maryam: “The suspension of decisions to improve women’s conditions and efforts to implement the issues promised by the constitutional document explains the strong reaction of women and their presence in the leadership of the resistance committees now.”

Engineer Amira Othman Hamed, head of the “No to Women’s Oppression Initiative”, believed that the ruling authority had no role in the first place until it failed to do so. She told Al Arabiya.net: “The government has supported all the policies that oppress women, the first of which is the economic policies that oppress them with hunger, poverty and more war and displacement. In addition to laws and the lifting of support for education and health,” she added, all of these policies raised the maternal mortality rate, which placed Sudan among the top 5 countries in the ocean.

As for the initiative, Ms. Amira said that she was formed from a group of men and women and participated in the campaign “The 16 Days to Combat Violence against Women and led processions and demonstrations.”

Some women’s bodies are still afraid of the under-representation of women in high decision-making positions, which posed a challenge that prompted them to propose a campaign called “Fear the Committee”, which encourages women’s participation in grass-roots building processes and neighborhood committees, which will result in empowering women leaders to compete for leadership political decision-making positions.