Watch .. Players and fans refuse to leave the stadium despite the eruption of a volcano next to the stadium 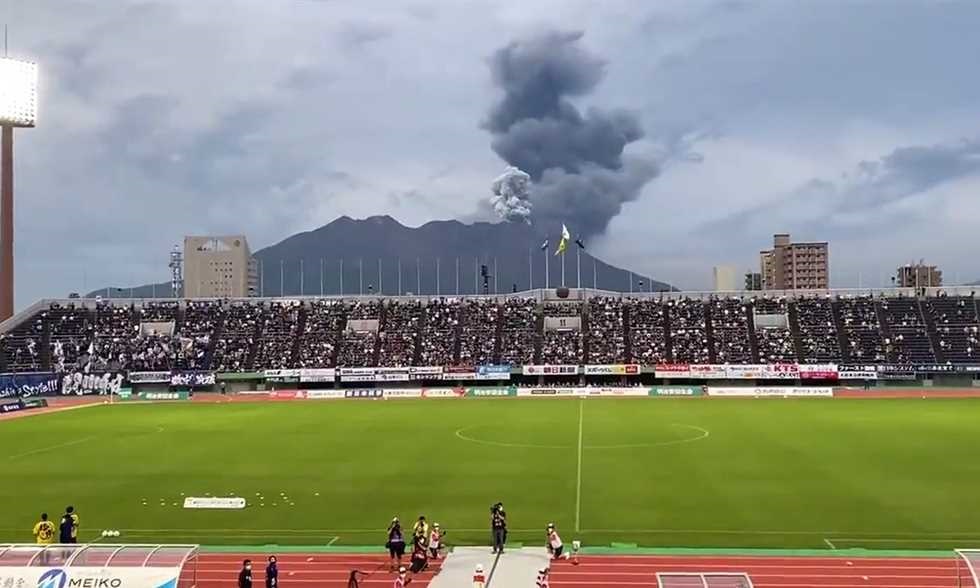 A match in the Japanese third division witnessed an unfamiliar scene in the world of football, as the flame of the Sakurajima volcano erupted during the match, without affecting the match or showing any kind of panic to the fans, so that the match was played to the end without any crisis.

The match was held in the 18th round of the competition between Kagoshima United Fanraori Hachinohe, and ended with the victory of the hosts with a goal without a response, but that was not the most important thing.

Where the footage spread on the communication site of the match being played normally, despite the appearance of volcanic smoke clearly in the unleashed.

Sakurajima volcano, located on Kyushu Island in Japan’s Kagoshima Prefecture, erupted on Sunday at about 8:05 p.m. local time, according to the Japan Meteorological Agency (JMA).

Footage showed the moment the volcano erupted during a football match in Kagoshima, and other footage from a surveillance camera showed a cloud of smoke and ash rising from the volcano.

The Japan Meteorological Agency declared a level five alert, the highest level in the country, and asked residents to evacuate their homes. There were no immediate reports of damage or injuries.

According to NASA, Sakurajima is one of the most active volcanoes in Japan.

A match in the Japanese third division witnessed a strange and unfamiliar scene in the world of football. This is after a volcano erupted #sakurajima During the match, without affecting the match or showing any kind of panic to the fans, so that the match will be played until the end without any crisis.pic.twitter.com/NTXby1QUPP