Watch… the battle to liberate “Ain”, the last Houthi stronghold in Shabwa 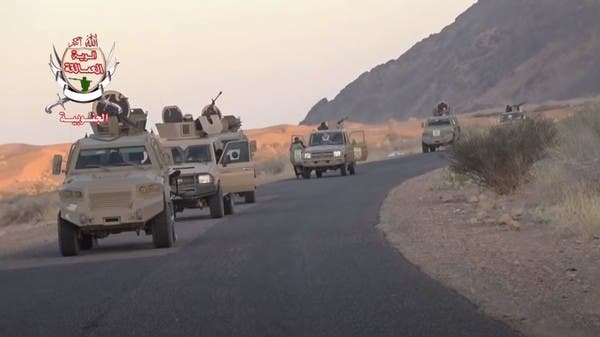 Today, Monday, the Giants Brigades forces, with the support of the Coalition to Support Legitimacy, managed to liberate the Ain district of Shabwa governorate, southeast of Yemen, from the Houthi militia after a violent battle in which the Houthi militia lost hundreds of dead and wounded.

The Giants Brigades decided the battle to liberate Ain District, the last stronghold of the Iranian-backed Houthi militia in Shabwa governorate, after they took control of the 153rd Brigade camp, amid a state of collapse among the Houthis.

The Giants Brigades Media Center published a video clip of the battle to liberate Ain District.

In this context, Yemeni President Abd Rabbo Mansour Hadi blessed the liberation of the districts of Baihan (Usailan – Bayhan – Ain) from the control of the Houthi coup militia.

Hadi confirmed, during a telephone conversation with Shabwa Governor Awad al-Awlaki, that this comes on the path to liberating Yemen completely from the Houthi rebel militia.

The Yemeni president valued the support of the brothers in the Coalition to Support Legitimacy led by the Kingdom of Saudi Arabia for the Baihan liberation process, stressing the appreciation of the Yemenis and its legitimate leaders for this support in order to restore legitimacy and protect the Yemeni identity from the schemes of the Iranian project.

In this context, Yemeni Minister of Information Muammar Al-Eryani confirmed today, Monday, that the collapse of the Houthi group in the governorates of Ma’rib and Shabwa came due to its great human losses. Al-Eryani said on his Twitter account, “The huge depletion of the human stock of the Houthi militia… its looted military equipment from the state’s camps during the past two years, and the painful blows it has dealt… the coalition to support legitimacy in its dens and strongholds, contributed to the unprecedented collapse” of its ranks on the fronts of Shabwa and Ma’rib governorates.

He expressed his regret that a number of civilians fell victim to mines planted by the Houthi group in areas controlled by the Yemeni army and the Giants Brigades in the districts of Usaylan, Bayhan and Ain in Shabwa.

And it confirmed in a statement, the completion of the third phase of Operation Cyclone Al Janoob, with the liberation of the Ain district, on the tenth day of operations, explaining that all the districts of Shabwa governorate were completely liberated.

The leadership of the Giants Brigades thanked the coalition to support legitimacy led by the Kingdom of Saudi Arabia and the support of the United Arab Emirates.